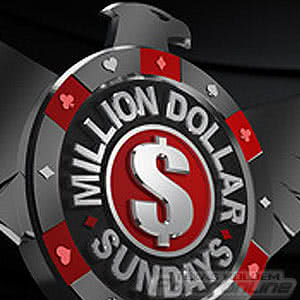 Despite the effects of Black Friday in 2011 and the fact that only a handful of states have regulated online poker since then, the game is alive and well in the US at the Winning Poker Network (WPN) as not one, but two Million Dollar Sunday tournaments will be played this coming Sunday, September 2.

WPN includes both Americas Cardroom and Black Chip Poker, the poker sites that most US players call home these days. And those players who do frequent ACR and BCP are in the midst of being treated to an unheard of three tournaments that each guarantee $1,000,000 in prize money over the span of eight days.

A total of 3,456 entrants created a prize pool of $864,000 in the MDS, falling short of the advertised $1 million GTD and forcing WPN to kick in $136,000 to match the massive guarantee. That overlay provided considerable value to the 459 players who landed in the money, especially “larryb83,” who topped the field to grab a cool $200,000 in prize money.

Kudos as well to “atasheli” and “AcoolA85,” who both missed out on winning the title, but neither missed out on huge paydays. A runner-up finish was good for $103,500 for atasheli, while AcoolA85 is even cooler for pocketing third place prize money of $69,500.

Those three players and thousands more are now preparing for next Sunday, Sept. 2, as two MDS tournaments are on the schedule. That’s $2,000,000 in guaranteed prize money – and perhaps more overlay value – with the events scheduled to start just two hours apart.

The first MDS begins at 1:00 p.m. ET and is designed for high rollers as the buy-in is $2,100. Players on a budget may not be able to afford that entry fee, but they certainly can afford to play any number of satellites available where winning a seat to the Million Dollar Sunday tournament can be done at a fraction of the buy-in.

At 3:00 p.m. ET on Sept. 2, the next MDS gets underway with a more affordable buy-in of $540. Once again, the satellite route is the way to go for players looking to enter the Million Dollar Sunday tournament on the cheap.

While most of the focus is on the two MDS tournaments on Sunday, Sept. 2, that happens to be the day before the Labor Day holiday on Sept. 3 and a number of players may have family obligations that might keep them from taking a shot at some huge prize money that includes $200K for first place. Not to worry as more Million Dollar Sundays are just around the corner!

WPN has already announced a MDS for Sunday, Sept. 9 at 1:00 p.m. ET, as well as Sunday, Sept. 16 at the same time. Entry fees for each are a bit pricey at $2,650, but plenty of satellites are on the docket so that players of all means and budgets can participate.

Speaking of players on limited budgets, Americas Cardroom is now offering $20 in free tournament tickets for new players just for opening a new account – without requiring a real money deposit to be made. The promo will run for an unspecified limited time before expiring, so new players would be wise to take full advantage by creating a new account ASAP and following the proper instructions. Who doesn’t want $20 in free money?

There are certainly a lot of $1,000,000 guaranteed tournaments available to American players in coming weeks. Online poker in the US is thriving at Black Chip Poker and Americas Cardroom on the Winning Poker Network!