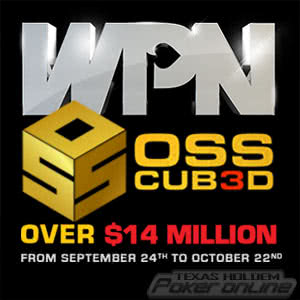 The schedule for the rearranged OSS Cubed consists of 452 tournaments guaranteed for more than $14 million and includes three Million Dollar Sunday events.

At the beginning of the month, the Winning Poker Network decided to cancel the remaining tournaments in its OSS Cubed series due to ongoing disruptions caused by DDoS attacks. The Network´s CEO promised the whole series would be run again; and, rather than repeat the previous schedule, the Network has devised a whole new schedule consisting of 452 tournaments.

Regular players at Americas Cardroom, Black Chip Poker and Ya Poker will recognize much of the new OSS Cubed schedule – as it is similar to the regular tournament schedule with the tournaments having enhanced guarantees. However, there are some special events to look out for among the $14 million guaranteed series – not least three Million Dollar Sunday tournaments on October 15th and 22nd.

MOSS, OSS and BOSS Rolled into One

Unlike previous OSS Cubed series, in which a mini buy-in series was followed by a standard buy-in series and a “bigger” buy-in series, the three elements appear to have been rolled into one despite keeping their names and having specific dates set aside for them. For example, the Bigger Online Super Series from October 16th to 22nd includes multiple low buy-in events starting at $3.30.

Similarly, the Mini Online Super Series from September 24th to October 1st – traditionally a series dedicated to players with smaller bankrolls – features twenty-four (of 129) events with buy-ins of $55.00 or more. Obviously this has been done to incorporate as many tournaments as possible to meet the series guarantee, and it could signal plans to end the previous format of the three-tiered series.

The Online Super Series from October 2nd to 15th consists of 230 events – more than 50% extra than the previous OSS Cubed series in its entirety. Again there is a wide range of buy-ins (from $1.10 to $530.00) and a fantastic range of tournaments for players to choose from including NL and PL Omaha tournaments, 7 Card Stud tournaments, and multiple formats of NL Texas Hold´em tournaments.

Despite the DDoS attacks that caused the previous OSS Cubed series to be cancelled, its feature Million Dollar Sunday event went ahead without incident. Buoyed by the fantastic support for the event – 2,698 players took part – the Winning Poker Network has announced that its rescheduled OSS Cubed series will have three Million Dollar Sunday tournaments – each with different buy-ins:

Four Weeks of Action Ahead

Although the three Million Dollar Sunday events are undoubtedly the highlights of the new OSS Cubed schedule, there is still more than $11 million in guaranteed prize pools up for grabs over the four weeks of the series. The action kicks off this coming Sunday (September 24th) with seventeen events guaranteeing $568,000 in prize money – the feature event being the Network´s $250,000 guaranteed Sunday Special that has a buy-in of just $55.00.

This Sunday also sees one of the last opportunities for players to win a package to the Punta Cana Poker Classic at the end of October. Two tournaments each with buy-ins of $55.00 take place at 6:00pm and 8:00pm, guaranteeing a minimum of ten packages between them. As well as the buy-in to the $500,000 guaranteed Punta Cana Classic Main Event, each package includes all-inclusive accommodation for two at the Melia Caribe Tropical Resort in the Dominican Republic – the perfect way to relax after four weeks of hectic action on the Winning Poker Network.