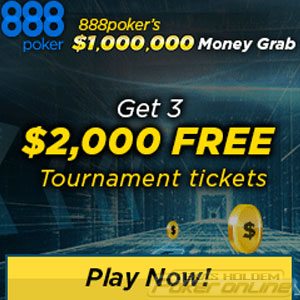 888Poker is giving players the opportunity to win a life-changing amount of money in the site´s new free-to-enter Million Dollar Money Grab promotion.

888Poker´s “Million Dollar Money Grab” is one of the best promotions we have seen in a long while. Without having to risk any of their own money or spend hours grinding away in cash games, all players have to do is run up a sequence of cashes in freeroll tournaments to win a life-changing prize.

The promotion starts this coming Saturday (16th May) and runs all the way through to 14th July – giving players plenty of time to cash in the promotion – and plenty of opportunities to fail in their quest to win $1 million and start again.

During the promotion period, 888Poker will be hosting “Money Grab Freerolls” three times a day. Each freeroll has a guaranteed cash prize of $2,000 and, in addition to winning cash prizes, the players who finish in the top 100 places will also be awarded with a Gold Chip.

The prizes continue to increase in value for consecutive top 100 finishes, until players who reach the top 100 places ten times in a row are rewarded with a cash prize of $1,000,000.

Qualifying for the Money Grab Freerolls

Every player will automatically be given three tournament tickets for the Money Grab Freerolls to be used when they wish. Further tickets can to be won in the Gold Chip Spin Game – a game which automatically pops up the first time you log into your 888Poker account each day – or awarded for completing specific missions.

The missions are quite straightforward and consist of playing a predetermined number of cash games each day, entering tournaments with a minimum combined level of buy-ins, playing at the 888Poker casino, or placing a sports bet through 888Poker´s sports book.

The best way of being awarded multiple tournament tickets is to make a deposit during the promotion period (see our table below), and 888Poker will also be running email and social media campaigns which will award further tournament entry tickets into the Money Grab Freerolls.

Players who have not yet registered an account with 888Poker and made their first deposit can take advantage of our exclusive bonus offer of a 100% match on first deposits of up to $600.00 (usually $400.00). This is in addition to the free poker money that 888Poker offers for testing out their site (varies according to your country of residence) and the opportunity to win $1 million in the Money Grab promotion.

Further information about 888Poker and the range of games on offer can be found in our review of 888Poker, but don´t delay in registering for your account – the Million Dollar Money Grab promotion starts on Saturday and there are only 171 opportunities to run up a sequences of Gold Chips before the promotion expires!