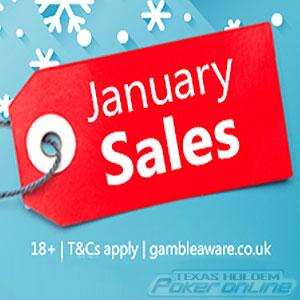 If you like to get a little extra value from your online poker tournaments, be sure not to miss next week´s January Sales on the iPoker Network.

From Monday January 25th January until Sunday 31st January, sites on the iPoker network will be discounting the buy-ins to sixteen regular scheduled tournaments with combined guaranteed prize pools of €250,000.

Not only does this mean that players will save money on the cost of their tournaments entries, there are also likely to be some significant overlays – guaranteeing extra January Sales value for players who cash in the discounted events.

Where to Find the Discounted Tournaments

The sixteen events that make up the iPoker January Sales are:

The January Sales coincide with the final week of the iPoker Network´s “January Missions” promotion for cash game players, and creates the opportunity for players not only to get a little extra value from their tournament action, but also to pick up a cash bonus just for being dealt pocket Aces.

During the week Monday January 25th January to Sunday 31st January, any player being dealt pocket Aces during a NL Hold´em cash game will receive a ticket into an All-In Shootout tournament that evening. Players are all-in every hand during the Shootout until the winners are determined.

If you are interested in taking part in this promotion during the January Sales, remember to opt-into the promotion via the poker client. You must also remember to register manually for each Shootout as unused tickets will expire after the last game on Sunday night.