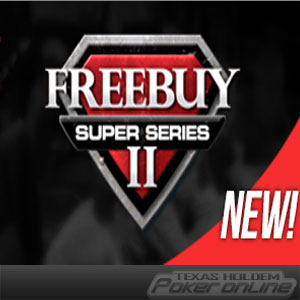 Americas Cardroom has announced that it will be running a second series of its hugely popular Freebuy tournaments from August 28th to September 6th.

Americas Cardroom´s “Freebuy tournaments” are free to enter, with players having the opportunity to re-buy at any stage during the first three hours of the event and top up their chip stack with an optional add-on at the end of the re-buy period. Thereafter, they continue in freezeout format until a winner is determined.

When Americas Cardroom ran its first Freebuy series back in May, all of the tournaments were well supported. However, many had massive overlays due to not quite as many players as expected taking advantage of the re-buy and add-on options. This scenario is expected to be repeated when Americas Cardroom hosts the Freebuy Super Series II from August 28th.

The schedule for Americas Cardroom´s Freebuy Super Series II consists of fifty-seven events over ten days, with a minimum of five events being played each day. Each tournament has a guaranteed prize pool ranging from $500 to $20,000, and the total value of the guarantees is $150,000 – not bad for a tournament series in which each event is free to enter!

Eleven of the fifty-seven events in the Freebuy Super Series II have guarantees of $5,000 or more (meaning that the winner of each event could pick up $1,000 or more for free), with the daddy of them all being the $20,000 guaranteed Main Event which is scheduled to take place on Sunday September 6th at 5:30pm (ET).

Freebuy tournaments start at a scheduled time (registration opens two hours before each event) with each player receiving a starting stack of 1,000 chips. Re-buys of 2,500 chips are available at any time within the first three hours, after which players can buy an add-on of 10,000 chips. Naturally, any player buying an add-on has a massive advantage over his opponents.

Despite this opportunity to get deep into the money (and two hours of late registration available), few players actually take advantage of it – consequently creating an overlay. This has been explained as being due to the majority of players competing in the Freebuy events being freerollers with no bankrolls to top up their chip stacks.

It was also identified during the previous Freebuy series that the standard of play prior to the add-on option was very weak. This gives accomplished players (or at least players with funds in the Americas Cardroom accounts) a better chance at making the money and getting the extra value from the events (*).

(*) In the previous Freebuy series, despite massive numbers playing in the tournaments, only one of the first nine events reached its guarantee. Overall it was estimated that the series cost Americas Cardroom more than $45,000 in overlays.

The Freebuy Super Series II is an ideal opportunity for players to get involved at Americas Cardroom and win a share of the $150,000 on offer without having to invest a considerable amount of their bankroll (in fact, without having to invest anything at all!). However, there are definite advantages to registering an account with Americas Cardroom and funding it with a substantial deposit.

Americas Cardroom offers new players a 100% bonus on deposits of up to $1,000 and has one of the most generous player rewards programs on the planet. On our page about the bonus code, we demonstrate how break-even players can clear the full bonus and pick up an extra $600 from the rewards program by playing for less than 3½ hours a day.