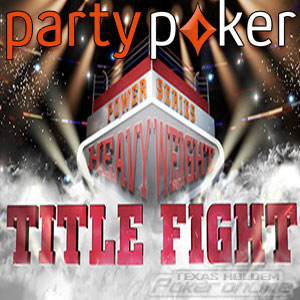 The guaranteed prize pool for Party Poker´s weekly feature tournament – the Title Fight – is going to increase by $25,000 each week the guarantee is met.

The site supported its new tournament with a comprehensive satellite schedule that enabled players to qualify from “Centroll” level, and the event has been a success ever since. Now, as the tournament has been close to hitting its guarantee every week, Party Poker has offered the incentive of increasing the guarantee by $25,000 each week the guarantee is met.

The announcement about the increased guarantees was released last Friday, and it had an immediate effect. When late registration closed for this past weekend´s Title Fight tournament, the event had receive 1,510 entries and re-entries – creating a prize pool of $302,000. After eleven hours of action, Roy Young and Peter Ness split the top two prizes, each adding in excess of $40,000 to their bankrolls.

More about the Title Fight Tournament

The Title Fight event takes place each Sunday at 7:00pm (GMT), with late registration open for four hours (twelve levels). Players start with 30,000 chips and blinds of 75/150 (ante 25) that increase every fifteen minutes. By the time the tournament has reached the end of late registration, the blinds have increased to 1,200/2.400 (ante 400), giving late-arriving players time to spin their chip stack up.

A maximum of two re-entries are allowed during the late registration period, giving players who have had the misfortune to be knocked out in their first or second Title Fight attempt a chance to get back in the ring and recover their lost pride (and their lost buy-ins). Re-entries have a significant effect not only on the prize money, but also on the number of players paid. Last weekend´s Title Fight paid 198 places.

Party Poker has given no indication that the value of the guarantee will be reduced if the previous week´s guarantee is not met, so it is safe to assume that there will be overlays in future Title Fight tournaments – particularly when the Title Fight clashes with the live Party Poker MILLIONS event at the end of April or the million dollar guaranteed PowerFest Main Event scheduled for May 21st.

It could also be the case that other online poker sites step up to the plate to give Party Poker some competition. Although PokerStars´ SCOOP is not due until May, it is conceivable that 888Poker hosts a worthwhile tournament, or that one of the US-facing poker sites hosts another million dollar guaranteed event – which are always popular with European players due to the extended late registration period.

Get Extra Value When You Play at Party Poker

In addition to the likely overlays in future Title Fight tournaments, there are plenty of ways in which players can get extra value when they play at Party Poker. There are several promotions running at the moment that face towards the Party Poker Millions in April, and the site has just launched a special Sit & Go Hero promotion that offers lottery Spin & Go players the chance to spin $100 into $1,000,000.

New players with more modest bankrolls can take advantage of the site´s excellent “Loyalty Rewards” program to earn tournament tickets and cash exchanges. Best of all however, is the site´s easy to clear first deposit bonus, which – when you use the Party Poker bonus code THPOBONUS – entitles you to a 100% match bonus on your first deposit up to $500.00.