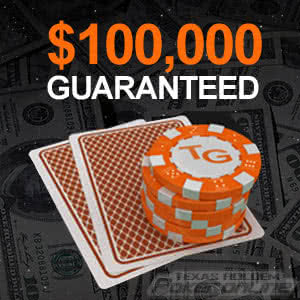 There is a share of $100,000 up for grabs in Tiger Gaming Poker´s Main Event on Sunday, and plenty of opportunities to satellite into the tournament cheaply.

This coming Sunday, Tiger Gaming Poker is hosting its monthly $100,000 guaranteed Main Event. As usual, the site is running a comprehensive satellite schedule to qualify as many players into the tournament as possible and there is also a Steps Sit & Go promotion that starts at freeroll level and which players can use their Comp Points to buy into at the higher levels.

The $109.00 buy-in Main Event starts at 7:00pm (all times ET) on Sunday and has fifty minutes of late registration (5 Levels). During the first sixty minutes, unlimited re-buys are available and, at the end of Level 6, players have the option of purchasing an add-on of 6,000 chips for another $109.00. Despite the re-buy and add-on structure of the event, there is likely to be a significant overlay.

How to Satellite into the Main Event

By comparison the $33.00 buy-in satellites at 10:00pm have offered plenty of value so far this week. Although each guarantee three seats into the Main Event, the two satellites to have taken place this week have both been undersubscribed. Last night´s satellite attracted just five players – three of which won their seats in Sunday´s feature rather quickly.

Weekend Satellites into the Main Event

There are a further three opportunities to satellite into the Main Event at the weekend. On Saturday, a $44.00 buy-in satellite is scheduled for 8:00pm guaranteeing four seats for the Main Event but please note that, earlier in the day at 2:00pm, there is a sub-satellite feeding into this tournament with a $4.40 buy-in – so it is unlikely to have much of an overlay if any at all.

Better opportunities for a little value might be available in the two hyper satellites on Sunday at 2:00pm and 5:00pm. Both hyper satellites have a buy-in of $16.50 and guarantee three seats for the Main Event. Because of the faster structure, there is a shorter late registration period and less chance of the satellites filling up at the last minute.

The Steps Sit & Go promotion has been moving along nicely this week due to players being able to buy into each of the four paid-for steps with Comp Points. However, the promotion is expected to really take off over the weekend following Friday´s freeroll tournaments at 7:30pm giving the top thirty players the opportunity to play in Step 1 for free.

In addition to the likely overlay in Sunday´s Main Event, Tiger Gaming Poker is currently running weekly cash races and weekly MTT/Sit & Go leaderboard competitions offering a combined total of $20,000 in free poker money each week. New players can also take advantage of a 100% first deposit bonus up to $2,000 and take part in an exclusive freeroll tournament with a $5,000 prize pool.

If you would like to know more about the opportunities available at the site, you will find them in our Tiger Gaming review. Alternatively, head straight over to the site and take advantage of undersubscribed qualifiers and the Steps Sit & Go promotion to satellite cheaply into Sunday´s $100,000 Main Event at Tiger Gaming Poker.