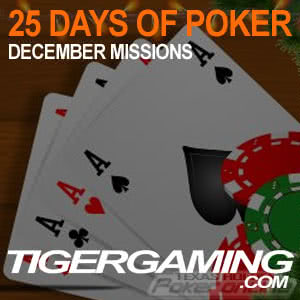 Tiger Gaming has launched a special Poker Advent promotion in which players can win seats into valuable freeroll tournaments by completing daily missions.

The countdown to Christmas is on, and Tiger Gaming is hoping to deliver some Christmas cheer this year with a missions-based promotion with an advent calendar theme. Each day until December 24th, Tiger Gaming will challenge players to complete a poker-based mission. Those who complete the mission before the deadline will be rewarded with a seat in that day´s freeroll tournament.

Each freeroll tournament not only has a cash prize pool, but the top ten players in each (plus the top twenty-four players in the Christmas Eve freeroll tournament) will be awarded a seat in a special All-In-Every-Hand Shootout on Christmas Day. The Christmas Day Shootout has a $7,500 prize pool, of which the winner will receive $2,500 – that would certainly bring some cheer to our house!

Not a Regular Missions-Based Promotion

Watch out for “genre-specific” missions that might require you to play a set number of Omaha Poker hands (rather than Texas Hold´em Poker hands), and please note hands played in heads-up games do not qualify for the promotion. It is also important to be aware that each day´s mission starts at 12:01am (ET) and finishes at 8:00pm (ET), as each day´s Poker Advent freeroll tournament starts at 9:00pm (ET).

Not Regular Freeroll Tournaments Either

Players expecting to qualify for relatively uninspiring NLHE freeroll tournaments are also in for a nice surprise. Although there are a few “regular” events, the calendar of tournaments – and the prize money available in each – changes every day. For example:

Although tournament entry tickets for each Poker Advent freeroll are awarded automatically, players have to register manually for that day´s event. Ticket cannot be carried forward and used for another freeroll, and you cannot exchange them for cash. With regard to the Christmas Day Shootout, you do not have to be logged into your Tiger Gaming account to play in this event because you will be all-in every hand. It is still important to register for the event manually if you finish in the top ten places in any other Poker Advent freeroll tournament.

The Poker Advent promotion is not the only reason to visit Tiger Gaming this month. After another busy weekend at the tables, the Bad Beat Jackpot has progressed beyond $800,000, a new $10,000 cash game leaderboard competition started last night (as did two more Sit & Go and MTT leaderboard competitions), plus qualifiers have now started for the site´s $100,000 guaranteed tournament on the last Sunday of the month – which could well have an overlay as it coincides with New Year´s Eve.

If you have not yet played at Tiger Gaming, why not check it out today (sorry, no USA players). The site is offering new players a first deposit bonus of up to $2,500 (please read our Tiger Gaming review to find out how to claim it) plus multiple bonuses for sports betting, horseracing and casino action. Creating and funding an account is safe and secure, and downloading the poker software takes just minutes.

Once you have downloaded the software, simply fire it up and log into your account. In the top left-hand corner of the poker client you will see a “Cashier” tab (not the big red button on the right-hand side of the screen). Click on this tab and scroll down to “Active Contests” to discover what today´s mission is in Tiger Gaming´s Poker Advent promotion. Then hit the tables to meet the qualification criteria for tonight´s 6-Max NLHE freeroll, and hopefully finish in the top ten places for your crack at $2,500 on Christmas Day! Good luck at the tables.