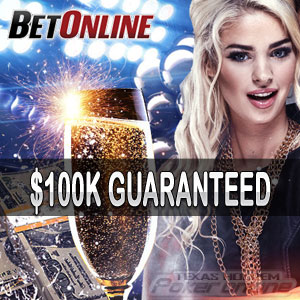 BetOnline Poker is celebrating the New Year with a massive $100,000 guaranteed poker tournament and giving players the opportunity to qualify for just $0.48.

BetOnline Poker is rarely the first destination many players consider when looking for valuable poker tournaments. Typically its tournament schedule consists of low buy-in events which, although well supported, are not going to result in life-changing cashes.

However, this coming Sunday, BetOnline Poker is hosting one of its most valuable tournaments for a long time – a $215.00 buy-in NL Hold´em event with a short re-buy and add-on period, and a guaranteed prize pool of $100,000.  What´s more, the number of places paid is limited – so players cashing in the top spots will win a higher proportion of the prize pool than in similar tournaments at other sites.

Set Your Clocks for 9:00pm this Sunday

BetOnline´s New Year´s Day event gets underway at 9:00pm (ET) on Sunday 1st January. Unlike many sites that keep their late registration periods open for hours, players can only enter the event up to the end of Level 5 (50 minutes). Players start with 3,000 chips and a gentle blind structure; and, at the end of the late registration period, the blinds will only be 40/80.

Up until the end of Level 6, players have the option of purchasing unlimited re-buys of 3,000 chips for $215.00 each. At the end of Level 6 there will be a five minute break, during which time players have the option of buying a 6,000 chip add-on for another $215.00. Thereafter the tournament continues as a freeze-out until the winner is determined.

Satellites Running Every Afternoon and Evening

On New Year´s Day, BetOnline will increase the number of satellites to five and run them every two hours from 10:00am. Because of the higher number of players expected to compete in the last-minute hyper-turbo qualifiers, buy-ins start at $11.00. Sub-satellites will be available for the higher buy-in qualifiers – again with buy-ins of $3.30 and $5.50.

BetOnline Poker is also promoting its New Year´s Day tournament with a four-stage Steps program starting at a $0.48 buy-in level for players wishing to maximize their ROI. The four stages each consist of 6-Max Sit & Go games, and the winner of each Step (winner and second in the first Step) goes on to play in the next Step or – if they win the final Step – wins a seat in the New Year´s Day tournament.

The Steps program can be entered at any of the four stages by buying in directly. The four buy-ins are $0.48, $1.33, $7.23 and $39.41, and whereas the action at the higher stages was pretty quiet in the run up to Christmas, it is now starting to increase dramatically as the target event approaches. In theory, you could enter a $0.48 Step 1 qualifier early on Sunday afternoon, and be playing on the final table of the New Year´s Day tournament within twelve hours for a potential prize in excess of $20,000.

So Much More Going on at BetOnline Poker

The site has recently introduced a $100,000 Bad Beat Jackpot and Bounty Tournaments with more than $10,000 in guaranteed prize pools each day. New players benefit from a 200% poker bonus up to $2,500 when creating their accounts with the BetOnline Poker Promo Code “VIP1000” and a ticket for an exclusive $5,000 freeroll. In fact, there is so much going on at the site, you are virtually assured of starting 2017 with a massive score at BetOnline Poker.