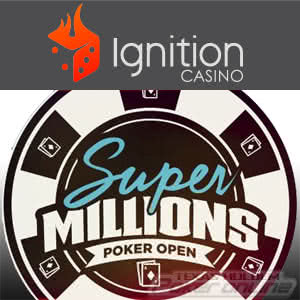 Players in the US looking for some quality tournament action during the summer should look no further then Ignition Poker´s Super Million Poker Open. The 105 event series runs from Saturday 15th July until Sunday 13th August and includes a wide range of formats and disciplines to test the poker skills of every online player.

With buy-ins starting from just $5.50, there is something for everyone in the tournament series. Players hoping for a big win for a small investment should check out the satellites that have just started running at Ignition Poker. You could win a seat in the $300,000 guaranteed Super Millions Poker Open Main Event from as little as $1.00.

Series Kicks Off in Style and Just Gets Better

Unlike some online poker series, in which the most valuable events are shuffled to the back of the series, there are tournaments with worthwhile prize money running throughout the four weeks of action. The opening weekend sees nearly $¼ million guaranteed in prize money divided over nine events including a $110,000 guaranteed “SMPO Special”.

The midweek action is not to be sniffed at either. Three events are scheduled for each midweek evening with worthwhile guarantees and plenty of variety on offer. There are knockouts, shootouts and deepstack hyper turbos running almost every night, with a good selection of Omaha tournaments thrown into the mix.

Sunday 13th August is a Day Not to Miss

Undoubtedly the tournament every player will want to cash in is the Super Millions Poker Open Main Event. The feature tournament gets underway at 5:00pm (ET) on Sunday 13th August and has a direct buy-in of $425.00 + $25.00. With the likely first prize in excess of $50,000, and a host of cheap qualifying opportunities, this is going to be a really popular event.

Either side of the Main Event, Ignition Poker has scheduled some tournaments that will definitely keep multitablers occupied. A Mini Main Event with a $75.00 + $7.00 buy-in gets underway two hours before the feature event, followed by another SMPO Special with a $110,000 guarantee one hour before the Main Event starts.

While the Main Event is in progress, three further tournaments get underway – a Second Chance event at 6:00pm (all times ET) for players who get knocked out of the Main Event during the early levels, a $20,000 guarantee knockout event (7:00pm) and a low buy-in “Wrap Up” event at 8:00pm. For sure, Sunday 13th August is a day not to miss at Ignition Poker.

If you are tempted to take part in Ignition Poker´s Super Millions Poker Open, don´t wait until the series starts to join the site. There are plenty of satellites running at present, and while many players are still away at the World Series of Poker, these satellites are not as populated as they will be once the early stages of the WSOP Main Event are out of the way next week.

Getting familiar with the site´s software – and the anonymous tables at Ignition Poker – before settling down to play in a valuable tournament can have its advantages; plus if you join the site today, you will be well on the way to clearing your bonus at Ignition Poker before the Super Millions Poker Open gets underway and have some extra funds in your account to pay for an extra buy-in or two.