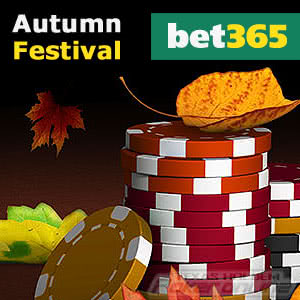 Online poker players who enjoy large tournament series are having a really good time at the moment. Although PokerStars, 888 Poker and Party Poker have just wrapped up their major autumn series, the Winning Poker Network is just embarking on its biggest ever OSS Cubed series, and Bet365´s Autumn Poker Festival begins on Friday.

In the volume of activity, you might have missed the news about Bet365 Poker´s Autumn Festival. Starting on Friday (29th September), it runs through until Sunday 8th October and consists of forty online poker tournaments guaranteeing more than €400,000 in prize money. The Festival may not be as big as some other series, but there will not be the same level of competition either.

A Closer Look at the Autumn Poker Festival

The Autumn Poker Festival could have been called the Autumn Texas Hold´em Poker Online Festival as thirty-nine of the forty tournaments have a NL Hold´em format. With the exception of the day on which the solitary PL Omaha tournament is held (Friday 6th October), the schedule follows a similar pattern – three “regular” NL Hold´em events followed by a Turbo NL Hold´em event.

The events are all scheduled to start at 6:30pm, 7:00pm, 7:30pm and 8:00pm (all times GMT) except on Sundays when the first three tournaments start half an hour earlier. The only other variety in the schedule comes in the number of seats at each table (6-Max, 8-Max and Full Ring) and the value of the buy-ins, which ranges from €10 up to €200.

Players looking to take part in the Festival tournaments should head over to Bet365 Poker this week, where low buy-in satellites are running throughout the day. As usual, most players seem to be leaving it until the last minute to sort out their qualification, so over the next few days there could be some soft satellites and easy qualification routes to the most valuable tournaments in the schedule.

A further reason why players may be distracted from playing in the Festival satellites is because it is the last week of Bet365´s Pro Collector promotion. This cash game-based promotion culminates on Sunday with an All-In Shootout that has a $10,000 prize pool. It is not too late to get involved in this promotion if you head over to Bet365 today and are prepared to spend a few hours at the tables.

Not Yet Playing at Bet365 Poker?

Although the value of the Bet365 Autumn Poker Festival may not be as headline-grabbing as some of the site´s competitors, there are plenty of good reasons to get involved in this series and the other promotions hosted by the site. Bet365 is the largest online betting website in Europe, and consequently you will find plenty of players with limited skill sets at its tables.

You can find out more about the site and the level of competition you will except to find at the tables in our Bet365 review. Our review provides further information about the opportunities that exist at Bet365 Poker, including the first deposit bonus – which although modest in comparison to many other sites, is easily achievable and complimented by a very generous player rewards program.