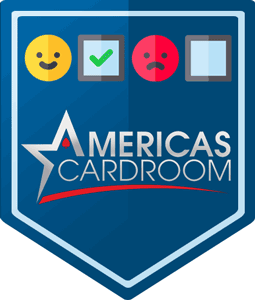 Americas Cardroom was launched in 2001, and became part of the long-running Winning Poker Network in 2011. Accepting players from most countries across the world (and most states in the US), the site is well-known for its reliability, fast-payouts and stellar promotions. These factors have helped to establish Americas Cardroom as a leading US-friendly online poker room.

In October, 2011, Americas Cardroom acquired Doyles Room, absorbing its player database in the process. The move was made both to strengthen Americas Cardroom’s position in the online poker market and to bring closure to many of the licensing and payment issues Doyles Room was struggling with at the time.

Following the acquisition, Americas Cardroom launched a full-blown marketing campaign – including the sponsorship of the Punta Cana Poker Classic and Latin Poker Series (formerly the LSOP Millions) – and introduced a number of popular promotions, including its weekly rake race “The Beast”. The success of the Beast, and the best VIP Rewards program for players in the US, has enabled Americas Cardroom to continue growing into one of the best online poker sites in the world.

The software will automatically detect your operating system and start downloading the installation file. Once the installation file has finished downloading, double click on it to start the Set-Up Wizard. The Wizard will guide you through the rest of the quick installation process, after which the Americas Cardroom poker client will automatically launch on your desktop. Thereafter, you will be asked to complete a simple registration form to create your account. Soon after clicking “Submit”, you will receive a Welcome email from the site and you are ready to fund your account and get playing at the tables.

Despite being aimed at the US market, Americas Cardroom is not a US-exclusive poker site and the options for depositing into your account will vary according to your location. As a rule, Americas Cardroom will accept P2P transfers through Western Union and MoneyGram but, if you wish to avoid paying fees on your deposits, the site has just started accepting Bitcoin as a deposit option.

Bitcoin withdrawals are now also available, as are withdrawals to eWallets and prepaid debit cards depending on your method of depositing into your account. Players who use a credit card to make their first or subsequent deposit at Americas Cardroom can withdraw their winnings by P2P transfer, check or – for very big winnings – by wire transfer.

The Americas Cardroom user interface is simple to use and easy on the eye. It features a checkered blue and black background, oversized cards and a distinctive lack of clutter. There are no avatars, no advanced chat features and limited customization options. Usernames are on full display, and we encourage players to take notes on their opponents (right-click on the player) for the reasons given in our “Level of Competition” section below.

In the main lobby, there are a few basic filters that allow players to sort games by preference, and clicking on the “Tournaments” tab brings players to a separate viewer, dedicated solely to tourneys. There is an excellent player admin page within the poker client which advises players of the bonuses that are available to them, how far they have progressed with their current bonus and what they need to do to reach the next stage, Level of Distinction or Medal of Achievement.

The cash tables at Americas Cardroom are dominated by “The Beast” – a weekly non-contributory rake race which rewards players based on the Beast Points they collect playing games of Texas Hold´em poker and Omaha Poker. Each week thousands of dollars in cash prizes and tournament tickets are paid out in prizes to players who put in the most time at the tables, and the nature of this promotion means that there is always some action going on at Americas Cardroom.

There are plenty of online poker tournaments and Sit n Go events throughout the day, many of which offer guaranteed prize pools – but watch out for erratic late registration periods! There is also a weekly “Sit n Crush” leaderboard competition which rewards players for the volume of Sit n Go games they play – rather than how they perform in them. Americas Cardroom also hosts “On Demand” tournaments, which start when a pre-determined number of players have entered – like Sit n Go games – and then allow late registration for the first six levels. The prizes are distributed according to how many players have entered when late registration closes.

Level of Competition on Americas Cardroom

When this review was originally compiled in 2011, the standard of play was described as “Donk City”. In later American Cardroom reviews, we commented on how the level of competition had got tougher due to the site allowing poker tracking software and HUDs. As a number of other US-facing sites have now adopted a “recreational model” that eliminate the benefits of poker tracking software and HUDs , the volume of highly-skilled players that take their online poker seriously has increased.

However, players who register for an account with Americas Cardroom after playing on other online poker sites might be surprised at how loose some of the general standard of play is. This is because of the Beast rake race and the need for players to earn points to maintain a top position in the leaderboard competition. For tight players, Americas Cardroom offers the opportunity to sit and wait for a strong opening hand and then clean up. It also provides an excellent education for new online poker players to learn how to deal with “LAGs” and we would suggest that new players take a look at the Beast leaderboard, to determine who the strongest players are in order to play them with caution when they meet them at the tables.

For most experienced players, the opportunity to win money at will at the tables has to be the coolest feature (the low-mid buy-in tournaments are fairly easy to beat as well). Recreational players can still win valuable prizes in the Sit n Crush leaderboard if they don´t have the hours to dedicate to the Beast, and Americas Cardroom has an excellent “Elite Benefits” loyalty program which will suit all types of players with their various award structures and Medals of Achievement.

However, the coolest features at Americas Cardroom are “Million Dollar Sundays”. These one million dollar guaranteed tournaments typically have a buy-in of $540.00 and, because the site is keen to avoid massive overlays, the events are usually supported by a vast range of promotions that allow players to qualify for pennies on the dollar. One player even won his seat for $0.12 after playing the site´s “Spin to Get IN” promotion.

The headline promotion at Americas Cardroom is their 100% match bonus on first deposits up to $1,000. The bonus is released in increments of $1.00 as players collect “Award Points” for contributing to the rake deducted from pots at the cash game tables or for paying fees to enter multitable or Sit n Go tournaments. Players get 60 days to clear their bonus – or as much of it as they can.

In order to take advantage of this generous offer, players must enter the Americas Cardroom Bonus Code THPOBONUS when creating their account. This will also give players twenty days of free Jackpot Poker, seats in a $250.00 “New Depositor Freeroll” and access to Americas Cardroom´s “Elite Benefits” rewards program, which has the potential to be exceptionally lucrative for players who intend putting in some hours at the site.

Whereas once upon a time, Americas Cardroom could be criticized for a lack of traffic and action at non-Hold´em tables, there is now very little to fault the site. Over the past few years, the standard of the software has improved, a better tournament schedule has been implemented and several potentially lucrative promotions have been introduced.

We would recommend this site as suitable for just about every type of online poker player, provided that you choose your tables carefully and approach players pursuing “Beast” points with caution.