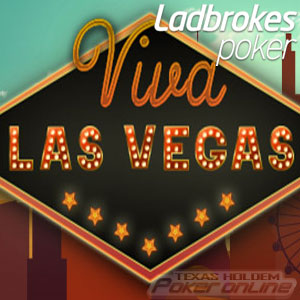 Ladbrokes Poker is hosting weekly super satellites and a special Twister promotion with €5,700 packages to the WSOP Monster Stack in June up for grabs.

From Saturday June 24th until Wednesday June 28th, the Rio Casino in Las Vegas will be hosting the WSOP Monster Stack event – one of the most popular events in the entire WSOP schedule. Last year nearly seven thousand players took part in the $1,500 buy-in tournament, with novice player Mitchell Towner collecting $1,120,196 for his hard-fought victory.

From now until Sunday May 14th, Ladbrokes Poker is giving players the opportunity to emulate Towner´s achievement by hosting a series of super satellites and a special Twister promotion with €5,700 “Viva Las Vegas” packages up for grabs. The packages include entry into the event, a weeks accommodation at the LINQ hotel for two, and €2,200 towards travel expenses.

This coming Sunday (April 26th), there is just one “Viva Las Vegas” package guaranteed, but from Sunday April 2nd, Ladbrokes Poker doubles the guarantee to two packages. The guarantee increases again on Sunday May 7th to three packages and, on the final week on the promotion (Sunday May14th) there will be five packages up for grabs.

While the super satellites are taking place, Ladbrokes Poker will also be hosting a “Viva Las Vegas” Twister promotion. The special Twister games have a buy-in of €2.50 and, just like regular Twister games, a random prize will be drawn before the start of each three-handed, hyper-turbo. One in 10,000 draws will result in the random prize being a €5,700 package to Las Vegas.

Naturally there are terms and conditions to comply with, but not a lot. Basically you have to be aged twenty-one years or over in order to take advantage of the prize because those are the rules for playing live poker tournaments in Nevada. As the “Viva Las Vegas” package cannot be transferred or converted into cash, it is not worth taking part in the promotion if you are aged twenty years or younger. You will need to make sure your passport is up to date as well.

Other than that, there is nothing to stop players heading over to Ladbrokes Poker and trying their luck in either of these two exciting promotions. From experience, it could be better to try your luck sooner rather than later in the weekly super satellites because, as the WSOP draws closer, the size of the fields will increase – both in the target event and the sub-qualifiers – making it harder to get to the top of the payout list and win a seat on the plane to “Viva Las Vegas”.