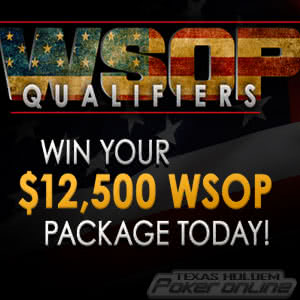 Americas Cardroom is hosting a Mega-Satellite at the beginning of next month that guarantees a minimum of fifty $12,500 “packages” for the WSOP Main Event.

If you asked a random selection of poker players what their ultimate poker-playing ambition is, most would answer “to play in the World Series of Poker Main Event”. The WSOP Main Event is the premier live poker tournament in the world and offers those who perform well in it (and get a little lucky) the opportunity to win a staggering, life-changing amount of money.

What is stopping many players from fulfilling their ambition is the $10,000 buy-in and the funds to support a trip to Las Vegas. However, Americas Cardroom is offering players the chance to qualify for the WSOP Main Event for just a fraction of the buy-in by hosting several WSOP-themed promotions including a WSOP Mega-Satellite on July 2nd guaranteeing a minimum of fifty $12,500 “packages”.

Step Your Way to the WSOP Main Event

The first of the promotions is an eight-level Steps program played through a series of 9-player Sit & Go games. The Steps start at a buy-in level of $0.28 and progress up to a $2,950 buy-in finale in which the top two players will each win $12,500 cash to cover the cost of their WSOP Main Event buy-in, plus a contribution towards flights and hotel expenses.

The lower levels of the Steps program have been well supported since the start of the promotion, and the program will receive a massive boost next week when the site´s Sit & Crush leaderboard competition pays out Step 4 tickets – each worth $55.00 – in addition to the regular cash prizes. Also, players reaching Step 6 will have the option to exchange their Steps ticket for an entry in the WSOP Mega-Satellite.

The WSOP Mega-Satellite is the biggest qualifier for the WSOP Main Event in years. It guarantees a minimum of fifty players will win a “package” of $12,500 paid as cash into each qualifier´s account – although there will likely be many more “packages” paid due to the extensive satellite schedule Americas Cardroom has put together to support the event and an anticipated large number of entries.

The Mega-Satellite is scheduled to take place on Sunday 2nd July at 3:00pm (ET). It has a buy-in of $540.00 for which players receive a starting stack of 10,000 chips to survive as long as possible throughout the fifteen minute levels. Late registration is open until the end of the twentieth level (five hours), by which time the starting stack will be the equivalent of ten Big Blinds.

More Packages Up for Grabs in Buck Hunt and WSOJ Promotions

Americas Cardroom is not usually a site you associate with gimmicks, but it has succumbed to the trend of dumbing down online poker with its WSOP Buck Hunt promotion – a promotion in which a flying chip appears randomly at the cash game tables between certain hours of the day. The player to reach fastest and click on the flying chip wins a random prize of between $0.10 and a $12,500 WSOP Package.

WSOJ stands for the World Series of Jackpots – a play on the site´s three-handed, hyper-turbo Jackpot games. Players can buy into the WSOJ games at either $3.30 or $33.00 and, once three players are seated at the table, a random prize is drawn (the higher the buy-in, the higher the probability of winning a higher prize. To date, three players have won a $12,500 WSOP package in the WSOJ promotion, but there will likely be many more won before the promotion draws to a close on June 30th.

Play at Americas Cardroom to Fulfill Your WSOP Ambitions

If it is your ambition to play in the World Series of Poker Main Event, there is no better place to start your quest than at Americas Cardroom. The site offers new players a generous first deposit bonus up to $1,000, twenty days of free poker, and a host of promotions including its non-contributory “Beast” rake race that is currently reaching prize pools in excess of $100,000 every week.

Furthermore, the site hosts the most valuable weekly tournament open to residents of the US, the $150,000 “Sunday Special”, and is home to the “Million Dollar Sunday” – a periodic tournament with a $1 million guaranteed prize pool, rumored to be next held in August as the feature event in a massive tournament series. Start playing today at Americas Cardroom and you might soon be planning your summer vacation to Las Vegas for the World Series of Poker Main Event.