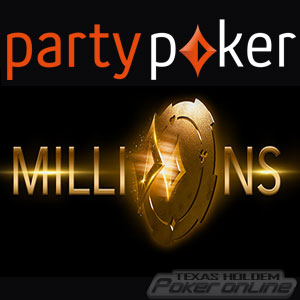 Last week, Party Poker (review) launched its qualification path for next month´s $5 million guaranteed Millions Online event. As usual, the qualification path starts at “Centroll” level; with “Feeders”, “Quarter-Finals” and “Semi-Finals” leading up to a $530 buy-in Mega-Satellite each Sunday that guarantees twenty-five seats in the Millions Online event.

Party Poker´s “carry-forward” format will be familiar to tournament players at the site. In certain multi-level or phased events, tournaments progress for a fixed period of time, after which surviving players carry-forward their chip stacks into the next level. If a player is dissatisfied with the size of his stack, they can try the lower level again and carry forward what he or she survives with the second time.

The carry-forward format is being applied to the Millions Online satellites and sub-satellites from the $22.00 buy-in hyper-turbo Quarter-Final stage upwards. Plenty of payers are surviving this level with chip stacks well in excess of the 100,000 starting stack players receive for directly buying into the Semi-Finals (for $109.00), and the same scenario is occurring going into the Mega-Satellites.

Has Party Got the Carry-Forward Format Wrong this Time?

Naturally, the number of chips being carried forward into the Mega-Satellites is representative of the number of chips in play in each Quarter-Final and Semi-Final. However, based on the sub-qualifiers that took place last week, players who qualify into the Mega-Satellites have a massive advantage over those who buy-in directly. Party Poker usually gets it right. On this occasion, the site may have got the format wrong.

In addition to the remarkable advantage players are receiving by taking advantage of the qualification path, Party Poker is entering the first one hundred players to qualify for the target event into a special last longest competition. Each of the first one hundred players to qualify will be given a Gold Chip, and the last player in the Millions Online event to have a Gold Chip wins a $15,000 package to the Millions Final next April in Barcelona.

Somebody has to win it, and the players with the best chance of qualifying for the event appear to be those starting their quests at the $22.00 and $109.00 buy-in levels. Will one of them be you? Only if you are playing at Party Poker.