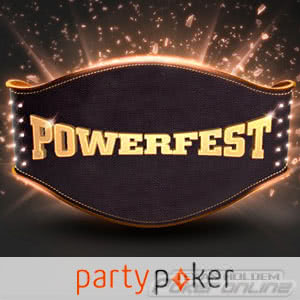 Party Poker has announced its biggest ever PowerFest series will be guaranteed for $35 million and include ten events with $1 million guaranteed prize pools.

Players who enjoy massive overlays should clear their diaries from 3rd to 24th September as, during those three weeks, Party Poker will be hosting its most ambitious PowerFest series to date.  The site has announced the series will consist of more than 330 events, with twelve of the events having a “Championship” tag and ten events having guaranteed prize pools of $1 million or more.

A Quick Recap of What Happened in May

The announcement of PowerFest VI includes a summary of what happened the last time Party Poker hosted a major tournament series in May – or, at least, the site´s version of events. According to Party Poker, PowerFest V was a “smashing success” and surpassed the series guarantee of $20 million by a “staggering” $7,012,812. However, the bare figures do not tell the whole story.

In May, Party Poker went head-to-head-to-head with PokerStars´ SCOOP and 888Pokers´ XL Inferno, and came out of the three-way battle badly. After a reasonable first few days of the series, multiple events failed to meet their guarantees. On the first Saturday of PowerFest V, Party Poker paid overlays on thirteen of nineteen events, and lost a further $132,000 the following day in its first $1 million guaranteed tournament.

The series was rescued in part by a massive turnout for the $25,500 buy-in Super High Roller tournament, but this would not have helped Party Poker recover its losses – the site having generously donated the entry fees to charity. Fortunately for Party Poker, a couple of High Roller events on the last day of the series clawed back some of the overlays, including a massive $210,000 overlay in the PowerFest V Main Event.

More Overlays on Their Way in September

PowerFest VI will be undoubtedly packed full of overlays, as the series will be going head-to-head-to-head with PokerStars´ WCOOP and 888Poker´s XL Eclipse Championships. Although the schedules for the WCOOP and XL Eclipse series are yet to be released, and although it is reasonable to expect some players will compete in multiple tournaments across different sites simultaneously, a three-way battle didn´t work well for Party Poker in May.

If you cannot wait until September to get your hands on some free poker money, Party Poker´s qualification route into the German Poker Championships is also overlaying considerably – particularly at the low buy-in levels. Based on last week´s qualifiers, it is costing Party Poker almost $2,000 per day to run its “feeder satellites” and “Championship qualifiers” into the German Poker Championships. But, if you want to take advantage of this opportunity, you will have to act smartly.

Players only have this week to qualify for and play in Phase 1 of the Championships before the online Phase 2 takes place at Party Poker next Sunday. If you survive the eight levels of the online Phase 2, you will be expected in the Kings Casino in Rozvadov on Saturday 12th August to play out the live conclusion of the €1 million guaranteed event. Better visit Party Poker today!