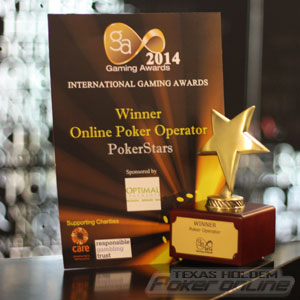 PokerStars picked up their second consecutive award for “Poker Operator of the Year” at a glittering awards ceremony at the Savoy Hotel in London last night.

The awards ceremony was hosted by the International Gaming Awards who, for the seventh year in succession, recognized the most valuable contributors to the gaming industry over the previous twelve months – both live and online.

As most online poker players would acknowledge, there is only one poker operator worth considering for events of this nature, but Eric Hollreiser – Head of Corporate Communications for the Rational Group – still seemed pretty chuffed when he went up on stage to collect the Gaming Awards trophy.

Run it twice! Hollreiser said, We’re proud to take down this award for the second straight time, and we’ll be doing everything we can in the next 12 months to make a strong run at a three-peat.

PokerStars Connections in Four Other Awards

Twenty-three awards were distributed in total at the charity bash, with a PokerStars connection in four of them.

Good Year for PokerStars – Even by their Standards

Throughout 2013 PokerStars maintained their position as the number one online poker site in the world. Indeed, the average number of cash game players on PokerStars recorded by poker traffic monitoring site PokerScout.com is as many as all the other major online poker sites combined.

However, there were several notable milestones throughout 2013 which kept the online poker site in the public eye – and drew the attention of the judging panel at the International Gaming Awards – including:

And the Winner is …

In addition to the seven winners already mentioned above, the other International Gaming Awards went to: