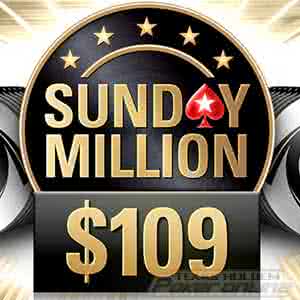 The reduced buy-in resulted in a starting field that more than doubled the typical amount of entrants who previously paid a $215 entry fee to play online poker’s richest and longest running tournament. The final tally was 12,458 players with 3,092 re-entries.

It took 14 hours of grinding before 555AU was able to stave off “Kmarao-Vix” from Brazil and claim the title. The runner-up just missed a six-figure score, taking home $99,334.48.

That 14 hours of poker action was roughly only one hour more than the average running time of the Sunday Milly. That certainly is good news for players who tend to stay away from entering huge events due to the excessive block of time needed to devote oneself to such a tournament.

But the better news, of course, is the halved entry fee that allows lower stakes players to participate in the tournament that’s been a mainstay in the online poker world for the past 13 years. PokerStars Team Pro Liv Boeree perhaps said it best when she gave her opinion of the reduced buy-in:

“I’m a big fan of this new structure because it maintains the enormous payouts for the final tablists but gives more people the opportunity to play this iconic tournament more regularly.”

While the slashed entry fee was primarily responsible for the huge turnout, a tip of the cap must also go to PokerStars’ extensive satellite schedule that permits players to win seats to big events at a small fraction of the actual buy-in. For the Sunday Million, those satellites start as low as $0.11.

A total of 2,798 players were able to take a seat in the Sunday Million via the satellite route. That’s 22% of the entire field and proves that lots of typically lower stakes players are aiming for a shot at a big payday like the one that 555AU enjoyed in the inaugural running of the reduced buy-in.

There are plenty of satellites running now for next weekend’s Sunday Million. All the information on satellite buy-ins can be found in the PokerStars lobby.

Online poker players who have yet to hit the felt at PokerStars are eligible for a Welcome Bonus of 100% up to $600. An added feature to the bonus is that the deposit doesn’t have to be made all at once.

PokerStars allows three deposits within a 60-day time frame that are all counted toward the initial deposit and the accompanying bonus. That bonus is a nice bankroll booster and, minus the rake, equates to six Sunday Million entry fees!