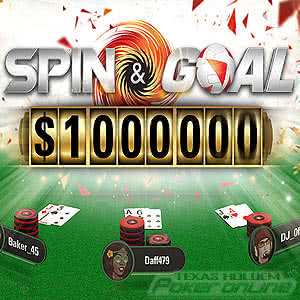 In advance of the 2018 FIFA World Cup that kicks off later this month, PokerStars has launched a new “Spin & Goal” promo that’s destined to make some new millionaires on its popular Spin & Go tables. The beauty of this promotion is that players can win up to $1 million without risking a penny!

Here’s how it works: New players that sign on at PokerStars beginning June 1 will receive 5 Spin & Goal Freeroll tickets to be used through July 23. The Spin & Goal Freerolls are hosted hourly, every day, with players able to choose the times to play that are most convenient for them.

The top 10 finishers of every Spin & Goal Freeroll will receive a $5 Spin & Goal tournament ticket. In other words, 240 free Spin & Goal tickets will be doled out to winners every single day.

The $5 Spin & Goal tournament tickets are valid at the Spin & Goal tables where three players compete for the prize determined by the random prize generator once all three players have entered and been seated. The prizes available to the winner of each Spin & Goal range from $10 on up to $1,000,000.

Should you happen to be seated at a Spin & Goal when the biggest prize available appears, the winner of the tournament will be awarded $1 million, while the 2nd and 3rd place finishers each walk away with $100,000. Everybody’s a winner in that case.

Existing Players Get Free Tickets Too

Of course, PokerStars would never ignore its loyal players in such an exciting and possibly lucrative giveaway. Existing PokerStars players (before June 1) are entitled to two Spin & Goal Freeroll tickets by entering the Star Code “SPINGOAL” after first clicking on “Tools” and then “Star Code” in the PokerStars client.

While everybody will be shooting for that $1,000,000 prize, the random prize generator will land on any one of eight different prize amounts that the eventual Spin & Goal winner will receive. Those amounts begin with $10 and climb up the ladder to $20, $30, $50, and $125.

The probability of hitting the higher prize amounts lessen at each greater level, however, the prize levels do continue on up to $600, $1,200, and the big one at $1,200,000. The $1.2 million prize is the only one where all three players will share the wealth, with the winner pocketing a cool million and the other two players $100,000 each.

The Spin & Goal promo will run for a limited time coinciding with the exciting World Cup that’s set for June 14 through July 15. Will you be the next PokerStars millionaire this summer?