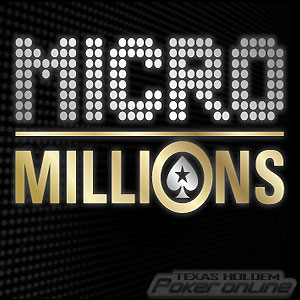 PokerStars has released the schedule for its forthcoming MicroMillions series – with 100 events over eleven days guaranteeing $5 million in prize money.

PokerStars´ MicroMillions series gives players with limited bankrolls the opportunity to win substantial prizes for small buy-ins and, since the series was first played in March 2012, it has become one of the most prestigious events in the online poker calendar.

The eleventh incarnation of MicroMillions looks like being just as popular as its predecessors – offering a combined guaranteed prize pool of $5 million over 100 events between July 16th and 26th, with a $1 million guaranteed Main Event scheduled for the final day.

With events starting at just $0.11 (and satellites for the more valuable events also starting at $0.11) everybody has a chance to win a substantial prize for a minimal buy-in; and, for the 100 most consistent players, there is a further $34,615 in free tournament tickets up for grabs in the Player of the Series competition.

The reason why PokerStars can host a 100 tournament series is that it offers such as a wide variety of games. In addition to Texas Hold´em and Omaha, the MicroMillions schedule includes poker disciplines such as Stud Poker, Razz, Badugi, 5 Card Draw, 2-7 Single Draw and Courchevel.

Players with skills in multiple poker disciplines will appreciate the mixed game tournaments of HORSE and 8-Game, while those who get bored with the standard format of poker tournaments will enjoy playing in the big ante games, the shootouts, progressive super knockouts and “Bubble Dash” tournaments in which the length of the levels increase as the tournament progresses.

Events are scheduled to take place around the clock so that players from all time zones can get involved in the action, and the series culminates on Sunday 26th July with the MicroMillions Main Event – a $22.00 buy-in tournament with a $1 million guaranteed prize pool that guarantees a minimum of $100,000 to the winner.

Win More through the Player of the Series Competition

As usual, a Player of the Series competition will run alongside the MicroMillions series. Players who cash in any of the MicroMillions events are awarded between 5 and 100 points depending on their finishing position. The points accumulate on a leaderboard throughout the series, with the top 100 players at the end of the series winning the following prizes:

When MicroMillions 10 was played, the Player of the Series – “PsychoPol” from Ukraine – finished on top of the leaderboard with 510 points after playing in all but one of the MicroMillions events. Tenth placed player – “excrulibus” – picked up 410 points from the 89 tournaments he (or she) played in.

Want to get Involved in MicroMillions 11?

If you are not yet playing at PokerStars, and would like to get involved in exciting schedule of MicroMillions tournaments that is soon to start, make sure you read our PokerStars review and sign up for an account within the next two weeks using the following marketing code for PokerStars: psa4352.

This code will make you eligible for a 100% first deposit bonus of up to $600 (€500 in Europe or £400 in the UK), plus all the additional cash rewards, benefits and VIP Stellar Awards available through the PokerStars VIP Rewards program.