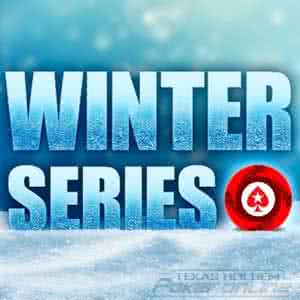 PokerStars has released the schedule for its $40 million guaranteed Winter Series running between Sunday 23rd December and Monday 7th January.

The schedule for PokerStars´ second Winter Series is a big improvement from the inaugural event last year. Running over sixteen days, rather than fourteen, the number of events has been extended from thirty-eight to sixty – each event having four buy-in levels – and the total amount of prize pool guarantees has been increased from $25 million to $40 million.

As with last year´s series, the schedule kicks off with a phased tournament running until the penultimate day, and focuses mostly on versions of NL Hold´em – with only a handful of PL Omaha and NL Omaha tournaments included in the schedule. Fans of progressive knockout tournaments will more than likely be very happy with the increased number of their favorite game.

A further million dollar set of tournaments takes place at the same time on Boxing Day, and again on Thursday 27th December – when the buy-ins for the special edition Thursday Thrill are half of those for the Super Tuesday events. There is also more than a million dollars on the tables during the set of tournaments replacing the Sunday Warm-Up on Sunday 30th December.

The series progresses through the second week with some valuable tournaments on New Year´s Day and a $500,000 guaranteed High Rollers event on Wednesday 2nd January. However, by that stage, most players´ minds will be focused on qualifying for the final stage of the phased tournaments that take place at 6:00pm on Sunday 6th January, and the four Main Events scheduled for one hour later.

PokerStars has also announced a Winter Series Challenge that rewards players who complete the challenge with a seat in a $25,000 freeroll tournament. The challenge is relatively simple inasmuch as completing it requires players to enter and play in at least five Winter Series events (minimum buy-ins apply). The freeroll tournament will take place on Friday January 11th.

Southern Europe Gets its Own Winter Series

Players in France, Spain, and Portugal also have the opportunity to boost their bankrolls over the festive period with their own Winter Series. The Southern Europe Winter Series is much different than that on the worldwide platform inasmuch as a limit exists on the maximum buy-ins for tournaments (€250), so PokerStars is unable to run simultaneous events with four different buy-ins.