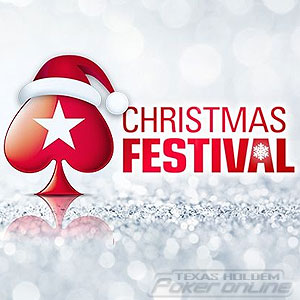 Although being advertised as promotion with a value of $10 million, PokerStars´ Christmas Festival – which starts today – could pay out considerably more.

PokerStars´ Christmas festival is a six-week extravaganza that provides players of all bankrolls with the opportunity to their share in millions of cash prizes, giveaways and mega-bonuses. The action kicks off today with fourteen days of “Daily Double Jackpots”, runs through December with a “Christmas Calendar” promotion, and culminates on December 27th with a $5 million guaranteed Sunday Million event.

The festival is being advertised as having a value of $10 million. But in reality it could be a lot more, as the first leg of the festive trio of promotions offers players the chance to win $1 million every day. By the time Day 2 of the promotion gets underway, you could be reading about three new online poker millionaires. In fact, if you play at PokerStars tonight, one of them could be you!

Whether or not you win a million dollar bonus in the Daily Double Jackpots promotion, you are almost certain to pick up something in the Christmas Calendar promotion (December 1st to 25th). During this period, players are invited to click on the “My Challenges” tab each day to see what PokerStars has in its goodie bag for them.

A new offer is promised daily, and includes the likes of prizes for playing in Milestone Hands, entries into valuable freerolls, Christmas Giveaway Challenges and extra cash bonuses. PokerStars will also be hosting Golden Sit & Go games and giving away PCA-related goodies – which could range from a nice PCA-themed baseball cap to keep the sun off your head at Christmas, or entries into a PCA satellite.

Starting on December 1st, PokerStars will be hosting hundreds of satellites starting from $1.10 that will lead players to a seat in the $5 million guaranteed Sunday Million on December 27th. The event gets underway at 14:30pm (ET) and guarantees the winner a cool $500,000. Not bad if you have spent a little too much in the run-up to Christmas!

Last year´s comparative event (which was also guaranteed for $5 million) attracted 31,439 players, lasted fourteen hours and was ultimately won by Norway´s “TrondheimAAA” – who picked up $489,130 after a six-way deal at the final table. 5,220 places were paid in last year´s tournament (the bubble burst a little more than five hours into the event), so with the host of satellites that are available, it should be possible to run a dollar into a couple of hundred with a little good fortune at the tables.

Watch Out for Further Details

Although PokerStars Christmas festival gets underway today, more details about the Christmas Calendar promotion are expected before the beginning of December. In last year´s Christmas promotion, PokerStars had dedicated milestone hands that paid out thousands of valuable prizes and we believe something similar might be in the pipeline.

In the meantime, get involved in today´s Double Daily Jackpot promotion. You could be one million dollars richer by this time tomorrow!