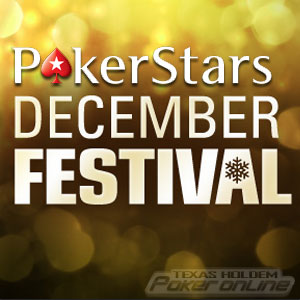 PokerStars has announced a stunning series of promotions throughout a December Festival during which more than $15 million will be up for grabs.

When Christmas comes at PokerStars, it comes BIG! The world´s largest online poker site has just announced a December Festival that has multiple promotions running throughout its duration and that has something for everyone – including some substantial cash prizes!

No matter whether you are a cash game player, a tournament crusher or a fan of the site´s “Spin & Go” product, you should head over to PokerStars this Christmas to share in their goodwill to all men – and, of course, goodwill to the ladies as well.

The promotion that has grabbed the most attention around our office is the $1 million Spin & Go promotion. Spin & Go games are a three-player hyper turbo tournament in which the prize money is randomly chosen before the start of the game, and usually only the winner of the game cashes.

Up until December 30th, PokerStars are increasing the top prize on its $5 buy-in Spin & Go games from $6,000 to a staggering $1 million and, although the likelihood of randomly hitting the jackpot is 0.00003%, when the magic million appears in the pre-game spin, the players who finish second and third in the game will also receive $100,000.

PokerStars will also be offering free tickets into their $5 Spin & Go through a series of daily challenges. Players can find out what their challenges are by visiting the player admin section on the PokerStars client.

During the December Festival, PokerStars will also be giving away stacks of cash to players seated around a cash game table when a milestone hand is dealt. The site is expecting to play more than 300 million hands at the cash game tables during December, and each time a million hand milestone is reached, players sitting at the table will be rewarded with a cash prize according to the number of VPPs they have earned during the last fifty hands.

When the 300th milestone is played, the value of the prizes on offer will increase tenfold and there will be additional prizes for players competing in the same game at the same stakes throughout the site – so you could be a winner even if not dealt into the 300th milestone hand. Unfortunately games of Zoom do not qualify for the milestone hand promotion, but PokerStars have thought of that with their Zoom & Boom promotion.

The Zoom and Boom promotion will run during the week 15th – 21st December and will reward players with 50x their stake unit (up to a maximum of $50.00) if they win a hand after being dealt the pocket pair of A♥ A♦ and they upload the winning hand onto the Boom hand re-player.

At least three players must be dealt into the hand and the pot must be won post-flop to qualify for the prize (so we can imagine a load of players limping into pots with red Aces!). There is a limit of one qualifying hand per day during the promotion, but we guess you might not care so much if you get dealt pocket Aces on multiple occasions!

What Else is on the Cards for Christmas?

PokerStars has not left out its tournament grinders in the December Festival, and from December 8th to 14th the site will be hosting a Knockout Week with $5 million in guaranteed prize money across twenty-seven events. The feature event is a $215.00 buy-in 6-Max KO event with a guaranteed prize pool of $500,000 on Sunday 14th December and, for players with more modest bankrolls, there is an event every day with a buy-in of just $11.00 or you can qualify for the feature event through satellites that have a buy-in of just $1.00.

The site is also going Christmas Crazy on the Sunday´s either side of Christmas Day – Sunday 21st December being a “Double-Vision” day on which four of the Sunday Majors will be played in 6-Max and 9-Max format, and Sunday 28th December seeing a Sunday Million tournament with a guaranteed prize pool of $5 million!

Winning that event would result in a Very Happy New Year!