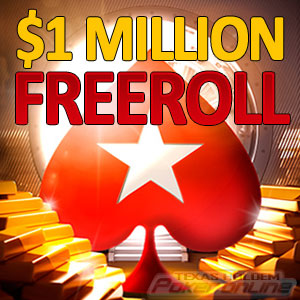 The date for the first of four promised PokerStars million dollar freeroll tournaments has been announced, plus the criteria to qualify for the event.

Yesterday, PokerStars (review) revealed the date for the first of the promised million dollar freeroll tournaments – Saturday March 19 at 1:04pm (ET). However, in amongst the razzamatazz about how one player was guaranteed a $20,000 first prize, and how up to 50,000 players could cash in the event, was the qualifying criteria – one which will exclude the majority of players from taking part in the promotion.

How to Qualify for $1 Million Freeroll

Once either of these two qualifying criteria have been completed, PokerStars will issue players with a satellite ticket. The satellite ticket is the only way into the 90-player Sit & Go satellites, and only nine players from each satellite will qualify for the million dollar freeroll tournament.

If players fail to qualify for the $1 million freeroll on either of their two attempts, that´s it. There are no third or fourth chances irrespective of how many games of poker are played or how much is deposited. In fact, players who make a withdrawal from their accounts between opting into the promotion and making a $20.00 deposit will have the second qualifying option removed from them.

The qualifying criteria would appear to have been constructed to appease skilled players who are still smarting from the reduction in their VIP rewards. With only the top 10% of each satellite field qualifying for the million dollar freeroll, very few unskilled players are going to get a shot at taking down a valuable prize and there will be little benefit to PokerStars´ pet project – the poker ecosystem.

PokerStars has ambitiously capped the entry limit for the freeroll tournament to 100,000 players. As 80% of their player database will not qualify for the target event – and not everybody is available to play on a Saturday afternoon – we believe that PokerStars is being a little optimistic about how attractive this promotion is for players.

Worth a Go – But PokerStars Should do Better Next Time

Undoubtedly it is always worth taking a shot at a $20,000 payday when a promotion costs close to nothing to enter. However, many players will be disappointed that there is little chance they will qualify for the target event when there is such a flat payout structure in the freeroll tournament itself. It certainly creates the impression that PokerStars has gone back on its word to nurture the ecosystem and is distributing funds back to its high volume players.

Hopefully the site will create more avenues for players to share in the prize money the next time it constructs a million dollar promotion so that every player genuinely has a chance of benefitting from the promotion.