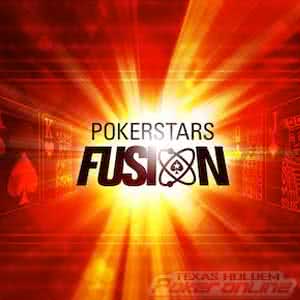 A new brand of poker has been rolled out by PokerStars that blends Texas Hold’em with Omaha, a hybrid that the game’s innovators call “Fusion.”

By all appearances, it looks like a fun new poker variant that may appeal to recreational players and regulars alike. Fusion made its debut on the cash game tables at PokerStars at a wide range of stake levels from $0.02/$0.05 on up.

Here’s how the game is played: Fusion begins in typical Texas Hold’em format as players are dealt two hole cards and a pre-flop round of betting ensues. The flop hits the board and is followed by another round of betting.

At this time, Hold’em begins morphing into Omaha as all players still active in the hand receive a third hole card. With regard to betting, the game is played as Pot Limit, meaning that no bets can exceed the amount presently in the pot.

The turn card is added to the community cards and players bet at their discretion before a fourth hole card is dealt to each player remaining in the hand. The river card is placed on the board and players commence to bet for the final time.

The winner of the hand is determined by the player with the best five-card hand using two hole cards and three community cards – just like Omaha. So the game begins as Texas Hold’em, but eventually ends as Omaha.

Sounds interesting and fun, right? It certainly is different, adding elements to the game that have never before been tried or seen. Poker purists may not like it, but players who welcome new challenges may find it exciting and a nice break from the usual fare of games available.

On the Cutting Edge of Creativity

Severin Rasset, Director of Poker Innovation and Operations at PokerStars, explained the reasoning behind the new poker variant:

Fusion mixes two well-loved formats together giving an exciting twist to the game. We want to give our players games that they have never played before and we eagerly await player feedback.

Fusion is just one of many new variations that PokerStars has released in recent times. “Showtime” and “Split Hold’em” also had test runs on the cash game tables earlier this year, as did “Unfold Hold’em,” a game that allowed players to get back into the hand after folding.

Fusion is likely the best of the bunch that will require a shift in strategy as the game transitions from Texas Hold’em to Omaha. On a personal note, I would love to see the game played as Hi/Lo, splitting the pot between the best high and low hands. There has been no announcement whether such an offering may be in the works.

In announcing the release of Fusion, PokerStars admitted that the new poker game isn’t intended to be a permanent fixture in the cash game lobby. So get on over to PokerStars and check it out. Who knows, it might just catch on and become popular!