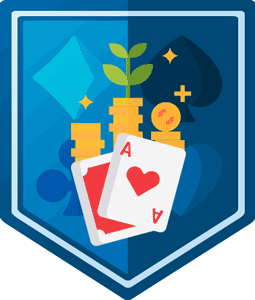 One of the most overlooked aspects in poker is bankroll management. Many good players fail to last the long run, because they handle their money so poorly. It’s a shame really, to see so many good players fall to the wayside, simply because they either have no self-control, or lack the basic knowledge of how to properly manage their bankrolls.

They typical player deposits a few bucks online, or heads to the nearest casino with a few hundred in their pocket. They sit down at the highest limit they can afford and play until they are either broke or don’t feel like playing anymore. Most of the time it’s the former, not the latter.

This plan is as well and good for the recreational player who only wants to enjoy themselves for a bit and winning money is a nice side effect of playing. But, you’ve come here to learn about poker and you aren’t the type of person who simply wants to have a good time. You want to win money!

This article will help you to become better at managing your poker bankroll so that you may handle the swings that will inevitably come your way in Hold’em Poker.

Since most of us play online these days, this article will be geared towards this arena. However, most of what is in here will also apply to live poker as well.

Also since there are a few different formats of poker that can be played online that each requires their own set of guidelines, this article will break each game type down into sections. We will cover cash games, tournaments and Sit-N-Go’s in great detail and you should by the end, have an idea of how to put a solid plan in place for yourself.

Note: From this point forward, the term: Sit-N-Go will now be-SNG.

The SNG is the easiest forum to manage your money in poker. They have the least amount of variance of all game types for the most part. When you start playing hyper turbos, you can throw all logic out the window and prepare yourself for the worse time of your life.

Hyper turbos aside, you can get away with a smaller bankroll than you would at cash games or tournaments, especially at lower limits.

If you are new to poker and don’t want to deposit a lot of money at once, you can get away with using a 25 buy in rule at the lowest limits. The play is so bad at these levels, you shouldn’t run into too many downswings that will leave you broke.

In general, its best to have around 50 buy ins for any limit that you want to play on a regular basis. This means that if you want to play the $6.50 18 mans on Stars, you should have at least $350.

This amount of buy ins will ensure that you will make it through those ugly downswings and still have a bankroll intact.

In my opinion, an online tournament is the most volatile form of poker, thus requiring a stricter set of rules to follow.

Most online tournaments will have upwards of a few thousand players making it very difficult to hit a final table or even cash. But, when you do cash, the rewards will be huge even at the lower buy ins.

To make it through the long stretches of no cashes or small ones, you need to be vigilant with your bankroll. A good rule of thumb is to use the 2% rule.

This rule will dictate that you may only use 2% of your bankroll to buy into a tournament. If you have a $300 bankroll, you should play no higher than a $6 buy in.

For those that play multiple games at once, you may have a hard time distinguish what 2% of your bankroll will be after you register for so many games. I find it’s easiest to use the 2% rule at the start of the day.

So, if you have $300, you shouldn’t play anything above the $6 buy in for that entire day, unless you hit a big score of course. The only caveat to this rule would be for those who play massive amounts of tournaments in one sitting.

Believe it or not, there are some players who willingly play hundreds of tournaments a day online. Why someone would want to subject themselves to this torture is beyond me, but to each his own. I’m a bit biased on this topic as I primarily play cash and personally can’t stand tournaments. But, todays tournaments have excellent value and if you have the stomach for it, they can be very lucrative.

Cash games fall somewhere in between the latter two forms of poker as far as volatility goes. However, the fact that you have a lot more money on the table that can be lost will dictate a very strict management structure.

With a SNG or MTT, you only have the buy in it cost to enter that you can lose. This is quite small in comparison to cash games.

To put that into perspective, let’s use an example.

Let’s assume you have $300 and are playing $5 SNGs. You can only $5 at any given time if you’re playing one game at a time. The same will hold true for MTTs.

If you were playing cash games and had a bankroll rule that allowed you to play 50nl, you could lose $50 in any one hand of poker.

That being said, cash games can also be the most rewarding for a good player, but you will need a much larger bankroll in comparison to the other forms.

You can get away with a smaller bankroll at the micro limits due to the weakness of the competition, but it’s still good to practice proper bankroll management at any level of play.

You want to develop good habits so that you won’t have to worry about too much when you start moving up. Having a good management in place once you get to higher limits will be one less thing to learn and you can focus your time and energy on getting better at poker.

Moving up and down limits

Moving between limits can be the hardest part of bankroll management. It’s still relatively easy, but most don’t use a proper method to ensure long term stability.

In cash games you should move up once you have the 40 buy ins for that next level. But, if you don’t feel you are ready for tougher competition, you should stay where you are until you feel comfortable.

You should move down in limits at cash games once you reach a certain threshold as well. Everyone will use a different guideline for this, but I like to drop down limits if I go on a 10 buy in downswing. If I’m playing 50nl and have a $2,000 bankroll, I would drop down a limit once I have around $1,500 or so. I will continue to play the next limit down until I again have the 40 buy ins for 50nl.

With SNGs you can follow the same rules. Move up when you have 50 buy ins for that level and move down a limit if you lost 15 or so buy ins.

There are a few things you can do along the way that will take you outside your bankroll guidelines, but these will be well thought out calculated risks that could show a huge return.

In a cash game, you may spot a very juicy game at a limit that you aren’t bankrolled for. However, the game could be so good that it would be worthwhile taking a shot. Sometimes I spot a good game and will take a percentage of my roll and take a shot at hitting a big score. If I lose my pre-set buy ins for the game, I will stop and go back to what I was playing.

I never risk too much though and only do so if the game will show a big return on my investment.

In closing, following a strict bankroll guideline in poker will help further your career and make sure that you always have money to play. Think of money in poker as your tool for making money. Without this tool, you cannot work and you will not make any money.

Treat your roll with respect and it will return the favor.