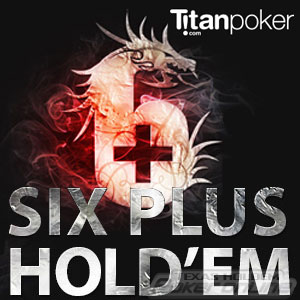 One of the fastest and most exciting versions of Texas Hold´em is being launched on Titan Poker next Monday February 22 – Six Plus Hold´em.

Six Plus Hold´em is played almost exactly in the same way as “regular” Texas Hold´em Poker, with all the cards ranked Deuce to Five removed from the pack. This results in players being more frequently dealt premium hands, which leads to a greater number of players being involved in each pot and more betting action overall.

The game is being launched at Titan Poker next Monday in a variety of formats. Players can experience the thrill of Six Plus Hold´em in tournaments, Sit & Go games and at the cash game tables. There will even be a fast-fold version of the game available on the Speed Poker tables – although it would appear that fewer players tend to fold their hands in this version of Texas Hold´em Poker online.

Better Odds of Making a Hand

According to our video below, the odds of being dealt a premium hand or making a winning hand in Six Plus Hold´em are significantly better than in regular Hold´em due to their being only thirty-six cards in the pack.

However, there are a few quirky rules that players should be aware of. For example, an Ace counts as a Five for the purposes of completing a Nine-high Straight. The hands also have a different hierarchy, with Three of a Kind beating a Straight, and a Flush beating a Full House because the odds of making a Flush decreases with fewer cards in the pack.

This is the full Six Plus Hold´em hierarchy –

– and this is the promotional video from the iPoker Network:

Six Plus Hold´em Imported from Macau

The origins of Six Plus Hold´em appear to be in Macau, where the game was allegedly played for nosebleed stakes between high-rollers such as Tom Dwan, Phil Ivey and Paul Phua. Indeed, Dwan and Ivey “co-starred” in a video last year in which they concurred that Six Plus Hold´em is more exciting than “regular” Hold´em.

Ivey warned that there are a lot more swings in short-decked poker, so it is important that players manage their bankrolls to avoid going bust. Dwan commented that there is a smaller amount of equity in premium hands, so whereas you might be an 80% favorite to win a pot when playing “regular” Hold´em, your chances of success are a lot closer in Six Plus Hold´em. You can watch the full video here:

If you are already playing at Titan Poker, Six Plus Hold´em hits the virtual felt on Monday February 17. If you are not playing at the site, the introduction of Six Plus Hold´em adds a new dimension to an already packed portfolio of games. Furthermore, new players signing up for an account using the Titan Poker bonus code “THPOBONUS” will automatically qualify for a 200% bonus up to $2,000 (£1,200 in the UK), making the bonus one of the most generous in the industry.

Full details about the Titan Poker bonus, the site´s excellent rewards program and the comprehensive tournament schedule can be found in our Titan Poker review. Alternatively, if you would like to start your Titan Poker experience ahead of next week´s launch of Six Plus Hold´em, you can visit the site straightaway by using one of our links.