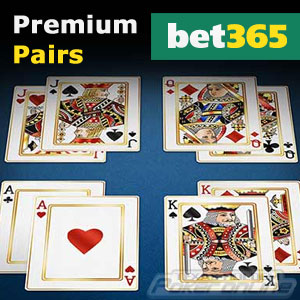 Bet365 Poker is hosting a simple-to-enter promotion in which players can win entries to All-In Shootout tournaments with more than €80,000 in cash prizes.

Until February 26th, Bet365 Poker is hosting a promotion in which NL Hold´em cash game players have the opportunity to convert their premium pairs into big cash prizes. In order to share in the prize money, all players have to do is opt into the promotion and then play their regular cash games of NL Hold´em.

The promotion also has an added extra for night owls. During the promotion, players who are dealt the qualifying premium pair during a bonus hour (11.00pm – 11:59pm GMT) will receive a ticket to another daily All-In Shootout with a further €500 in cash prizes.

What Is a Qualifying Premium Pair?

During each week of the promotion, Bet365 Poker has stipulated which premium pair qualifies for an All-In Shootout ticket. This week for example (January 30 to February 5), you will receive an entry ticket for the daily All-In Shootout if you are dealt pocket Jacks. You do not have to win the pot with your hand – being dealt the cards is sufficient to be awarded the prize. The full list of premium pairs is as follows:

Once registered, players do not have to physically present or logged into their Bet365 accounts to play in the Shootouts. Every player will be all-in every hand until the prize winners are determined. Other than for the daily All-In Shootout, tickets can be saved for multiple entries in later events. Players are allowed a maximum of two entries in each weekly All-In Shootout and up to ten entries in the Bonus Hour All-In Shootouts.

What Else is Happening at Bet365?

Tournament players are not forgotten during the Premier Pairs promotion. In addition to its regular MTT Missions promotion, Bet365 Poker is hosting a €200,000 KART tournament series from next Sunday (February 5). The series features twenty-six tournaments – including two with €50,000 guaranteed prize pools – with buy-ins starting at just €0.50. Satellites are already running in the poker lobby and, throughout this week, players can win addition tickets in a series of €1.00 buy-in events.

The site is still running its Twister Warrior promotion for fans of short-handed hyper-turbo Sit & Go games and maintaining its offer for new players of a free €5.00 cash game ticket, plus a 100% Bet365 Poker bonus up to €100.00 for depositing players. The Welcome Package also includes an extra €5.00 in tournament tickets, ten free spins on a casino side game and a Welcome Mission in which new players can win extra prizes.

With so much going on over the next couple of weeks, now would be a good time to visit Bet365 Poker.