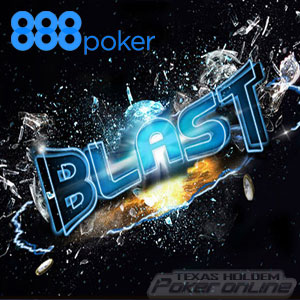 888 Poker has launched a new super-turbo Sit & Go game – BLAST – and supported the launch of its new game with a super-lucrative $1 million promotion.

888 Poker´s new BLAST game is a four-handed, super-turbo Sit & Go game that awards a random prize at the beginning of each game. Play continues for a predetermined number of levels until time runs out, when the game changes to an All-In Shootout.

BLAST represents a significant departure from the usual super-turbo Sit & Go games. It is not the first to host games four-handed, nor the first to vary the frequency of its top prizes according to the buy-in, but it is the first to introduce a time limit to each of its games to create a new level of excitement.

How to Play BLAST

The game gets underway like a normal Sit & Go, with levels of two minutes each. However, depending on the prize pool multiplier that has been drawn, the game only lasts a predetermined number of levels:

Once the game reaches its predetermined time limit, the remaining players are all-in every hand until the winner is decided. Although removing a degree of skill from the endgame, the All-In Shootout does provide for a more exciting conclusion.

Also different from many other super-turbo Sit & Go games, BLAST has a payout structure that can see second, third and even fourth-placed players sharing in the prize money. Only in games with a 2x prize pool multiplier does the winner take all.

To support its new game, 888 Poker has also launched a $1 million BLAST promotion. The promotion runs from now until Monday 19th September and consists of daily and weekly BLAST tournaments, offering cash prizes and BLAST entry tickets to those who cash in the special tournaments.

Players with existing accounts at 888 Poker will automatically receive four tickets into the special BLAST tournaments. Additional tickets can be won by completing daily challenges or purchased from the 888 Poker online store.

888 Poker is also hosting a special “Lightning Spin” game in which players can win tickets to the BLAST tournaments, tickets for the regular BLAST Sit & Go games, freeplays at 888 Poker´s online casino and free sports bets. Existing players can spin the wheel up to twice each day.

Up to $88 Free and an Exclusive Poker Bonus

If you are not yet playing at 888 Poker, and fancy experiencing the thrill of the site´s new BLAST game, you can get up to $88 free poker money (amount depends on your location) and take advantage of an exclusive poker bonus up to $600 by registering your account through TexasHoldemPokerOnline.com.

Simply click on the links to 888 Poker that appear on this page and, when you land on your local 888 web page, follow the instructions to download the poker software, register your account and collect your free poker money. More information about the offer and our exclusive poker bonus can be found in our 888 Poker review, or you can head straight over to the site and start having a BLAST today.