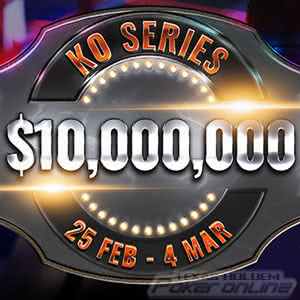 On Sunday, just as the feature events in Party Poker´s PKO Series had got underway, a server malfunction caused the site to crash – resulting in the cancellation of dozens of tournaments and severely disrupting cash games. To compensate, Party Poker is adding almost $2 million to next weekend´s tournament guarantees.

Confusion reigned last Sunday evening at Party Poker when, shortly after 8:00pm (GMT), a server malfunction caused the site to crash. At the time the site was reaching the climax of its Progressive Knock Out series, and six Championship events – including two with $1 million guarantees – had just got underway.

Despite the Championship events still being in late registration, many were significantly undersubscribed; and, at the time of the crash, Party Poker was looking at a loss of over a million dollars. Social media subsequently erupted with allegations that the crash had been deliberately caused to reduce the site´s exposure to loss.

Despite the server malfunction being resolved within an hour, all tournaments were cancelled. Naturally many players – especially those who had made good starts in the Championship events – were upset about the cancellations. Now the site has apologised, and increased the guarantees for next weekend´s tournaments by almost $2 million to compensate for the outage.

Writing in Party Poker´s blog, Party Poker´s MD – Tom Waters – acknowledged the upset that had been caused and that the site may have lost some players as a result. He assured readers that refunds were being processed as quickly as possible and that measures had been put in place to ensure a similar event does not happen again.

Despite the possibility player numbers may be down, Waters wrote he would not be reducing the guarantees for the new Power Series tournaments that started last night, and he would expect to see some substantial overlays as a result. (In fact, most tournaments surpassed their guarantees, and those that fell short were only undersubscribed by small margins).

Waters also announced the changes to next weekend´s schedule, which include an additional Super High Roller PKO event and the re-scheduling of the Ladies PKO events that were cancelled due to the outage. The revised tournament schedule now looks like this:

Plenty of Value for Players that Cash in these Tournaments

The consequence of increasing the guarantees for next weekend´s Big Bounty Hunter events will likely be some substantial overlays. For example, even though Party Poker includes the value of bounties as part of the guarantee (which in our opinion is wrong), the site will have to attract ten thousand players for the micro buy-in event in order to break even.

In terms of the most valuable overlay, this will likely come in the $215.00 buy-in event. When Party Poker last hosted a $1 million guaranteed PKO event with a $215.00 buy-in (on Sunday 25th February), it attracted 3,856 players and resulted in an overlay of $228,800. For players with limited bankrolls, the site is hosting a steps satellite program into this event.

Tom Waters´ prediction that last night´s Power Series tournaments would overlay substantially may not have come true, but there is little doubt that next Sunday´s guarantee-enhanced events will. If you want to get your hands on some free cash, visit Party Poker to qualify today for the value-laden events; and, if you are not yet playing at the site, read our Party Poker bonus page to find out how to take advantage of the site´s first deposit bonus.