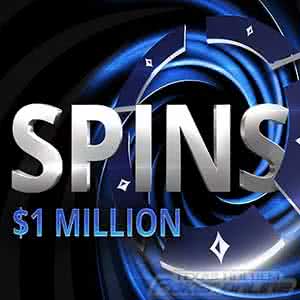 A rebranding of Party Poker’s Sit & Go Jackpots game to “SPINS” is being celebrated with a special $5 buy-in that can make you a millionaire within minutes.

The odds of that happening are 1 in 1,000,000 – and you have to beat two other opponents to boot – but it’s a gamble that fans of hyper turbo, three-handed action can’t get enough of. Plus, there are plenty of other big prizes that are up for grabs after plunking down $5 for the special SPINS game.

The probability of landing on each is, of course, more likely on the lower end of the spectrum. Roughly 76% of the time, three players will be fighting for a winner take all prize of $10, while the prize pool increases to $20 in about 21% of $5 buy-in SPINS games.

You don’t have to be a mathematics major to figure out that your odds of a massive prize pool appearing are quite slim after about 97% of the SPINS games will be either $10 or $20 prizes for the winner. On the other hand, somebody has to be on the receiving end of the largest prizes possible, as the $5,000 prize pool will show up 6 times out of a million SPINS games and the $500 prize will be activated 20 times.

Incidentally, those top three prizes are not played under a winner take all format. All three players will share in the bounty, which is a good idea as it would be heart-breaking to land on the biggest prizes and walk away with nothing.

Take a look at the chart below that spells out the probability of hitting each prize pool and the multipliers involved. The top prize is a massive 240,000x multiplier on the $5 buy-in and reserves $100,000 in prize money for the two players who don’t win $1 million.

The rebrand comes complete with smoother animation and visual enhancements, improving on the overall poker-playing experience at Party Poker. It got a big thumbs-up from Party Poker Team Pro Sam Trickett, who said:

SPINS are quick, fun and easy to play. I can’t wait to see who will become the first SPINS millionaire, from just $5!

Players can expect the special $5 buy-in SPINS with a $1 million first place prize to be quite popular while the promo is in effect. But it likely won’t last forever.

Until February 17, there’s also a special $2.50 buy-in KO Series SPINS game that offers a top prize of a $1,050 KO Series ticket. That’s quite an inexpensive buy-in for a shot at a big time tournament seat. The multipliers have been adjusted for the KO Series SPINS game with 11 top prizes to be distributed per every one million $2.50 SPINS games.