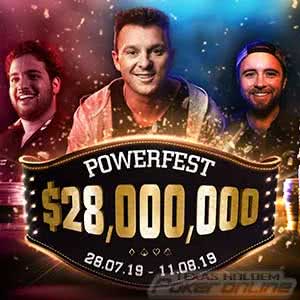 Party Poker will host a new Powerfest series starting later this month that will pay out $28 million in guaranteed prize money over 15 days of poker action.

A whopping 275 tournaments are on the Powerfest schedule at a wide variety of buy-ins to suit every budget, with the lowest entry fees starting at only $5.50. The online poker festival will run from Sunday, July 28 thru Sunday, August 11.

Players can select their buy-ins via categories that range from Low to Super High Roller. Among the offerings are a bunch of different formats such as Progressive Knockout (PKO) and 6-Max. Pot Limit Omaha lovers will be able to get their fix as well with almost $2 million in guaranteed prize money in PLO events.

There are plenty of ways to qualify for Powerfest events including a unique new approach called Satellite Week. Party Poker has devoted a whole week for Powerfest satellites to take place just prior to the start of the series.

Satellite Week runs from Sunday, July 21 thru Saturday, July 27 and is geared toward making the opportunity to win seats to Powerfest events simple. Satellite entry fees are as low as $0.55 and include a range of different formats and game types.

There’s also a $10,000 freeroll to kick off Satellite Week on July 21, as well as daily $1,000 freerolls over the course of Powerfest. The prizes include tickets satellites.

While satellites can get you in a Powerfest seat inexpensively, so too can special Powerfest Sit & Go Spins games. Throughout the online poker festival, special $5 buy-in Spins will send winners to Powerfest events at a number of different buy-ins.

The biggest possible multiplier in Powerfest Spins is 210x a single buy-in, meaning that the largest prize is a Powerfest ticket worth $1,050. However, the odds favor a lesser-valued ticket, such as those listed below:

You could certainly spin your way into a big Powerfest event for only $5. Of course, you have to beat your two opponents in the three-handed lottery-style jackpot Sit & Go game first.

The upcoming iteration of Powerfest includes eight Championship tournaments with buy-ins as low as $11 and as high as $2,100. In addition to huge prize money, the winners will receive a trophy commemorating their success on the felt.

#POWERFEST returns in a shade over two weeks, are you ready to play for a share of more than $28 million worth of guaranteed prize pools? https://t.co/FDIYZZ8dqO 18+. Play responsibly. begambleaware pic.twitter.com/ieWMoNGYLj

Do you have what it takes to be a champion? It’s only $11 to try, or you can win a seat to a bigger Championship event during Satellite Week.

A total of $2.6 million will be paid out over the 16 events, so a big score is possible for just a few hundred bucks. A $320 Powerfest ticket can be won in the $5 Spins.

Party Poker recently updated their software and banned the use of HUDs. The poker room is in the midst of making lots of changes designed toward safety and fairness.

The site is growing and seems to be on a mission to overtake PokerStars as the world’s most popular place to play online poker. It’s definitely worth checking out for those players who have yet to play there, especially with Powerfest right around the corner.