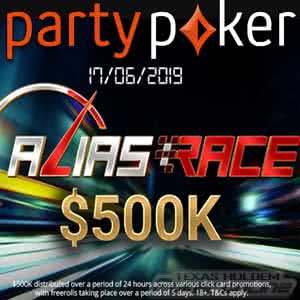 Party Poker is giving away $500,000 in cash to its loyal players on June 17, but to participate in the promo players have to first select a new online alias.

It’s all part of a software update that will prevent the use of third-party tracking tools as Party Poker continues in its quest to level the playing field for recreational players and provide a welcoming and safe poker-playing environment. That’s been the trend among online poker sites in recent years as the industry aims to please the net depositors more so than players who frequently cashout. Let’s hope the software update goes smooth, as the recent one on Americas Cardoom came with a lot of down time.

Tracking tools are typically used by pro players to gather information on the tendencies and playing styles of their opponents. Such third-party software has long been the bane of casual players, viewed by many of them as totally unfair as it gives its users too great an advantage.

Players in favor of third-party software argue that anybody can purchase and learn to use such tools that are readily available and at their disposal. Recreational players tend to counter with the argument that they just want to play poker and not be tied to complex tools that take away some of the pleasure of the game.

Party Poker apparently sides with the casual crowd and is working on “a number of initiatives” aimed at poker site safety while preparing to implement a change that will allow all players “to have a fresh start” under a new screen name, said the poker room’s managing director, Tom Waters.

The $500,000 giveaway has been dubbed the ‘Race to Alias’ promotion as all players will have an equal chance to claim their favorite online monikers under a first come, first served award system. The race for preferred screen names begins June 17 at 09:00 BST (10:00 CET) and all players will be required to choose a new alias after being prompted to do so by a pop-up window.

The new screen names must adhere to common forms of decency and appropriate language. Any aliases deemed to be offensive will be blocked from usage.

Our next software update happens on June 17 and everyone will be prompted to change their #poker alias. We'll be running a $500K Alias Race on June 17 for everyone who changes their name, click the link for more info. https://t.co/tQlyEhAh1z 18+. Play responsibly. begambleaware pic.twitter.com/ym7tP1xhG8

The June 17 software update follows a previous upgrade that included a redesigned hand re-player with optimized controls and a more simplified dashboard. The $500K player alias change will not include Czech Republic players who will instead have an exclusive Race to Alias of their own valued at $25,000 in bonus cash and prizes.

Party Poker expects to announce additional software updates in the future. But for now, mark June 17 on your calendars in order to secure your favorite screen name and be a part of the $500,000 giveaway!