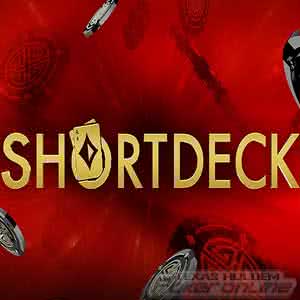 The Six Plus Hold’em poker craze has reached Party Poker as the growing poker room added the variant to its offerings under the name of “SHORTDECK”.

Whether you favor the name Short Deck Poker or Six Plus Hold’em is a matter of preference. The constant is a 36-card deck void of the 16 cards valued deuce thru five.

Party Poker, always conscious of creating a product that sets itself apart from other poker sites, has elected to go with SHORTDECK, all in capital letters. This follows in the same vein as Party Poker’s hyper-turbo Sit & Go jackpot game called SPINS, which is virtually the same as the lottery-style SNGs at other poker rooms, albeit with a different name.

SHORTDECK is now available on Party Poker’s cash game tables that feature a maximum of 2, 6, 8 or 9 players. The variant can easily be found via a SHORTDECK tab in the Cash Game lobby within the Party Poker client.

For those unfamiliar with Short Deck Poker, the lesser number of cards in play makes for better hands and increased action. The game is said to have originated in Asia circa 2014 at the high stakes cash game tables.

Great news for those of you who love cash games with plenty of action because today we have launched, in beta, SHORTDECK! All SHORTDECK games are played with a 36-card deck and the likes of @JasonKoon love this format! https://t.co/X4FlUXVIPt 18+. Play responsibly. begambleaware pic.twitter.com/HXji9Rryb1

It has since made its way around the world, as sites like Americas Cardroom and PokerStars have spread the game. Six Plus Hold’em will also be played for the first time as a WSOP bracelet event at the 2019 World Series of Poker this summer.

Short Deck Poker tournaments have been in vogue among high rollers for the past year or so, most notably at the Triton Poker Super High Roller Series tour stops in Jeju and Montenegro. Party Poker has taken a page out of the Triton Poker SHR book upon launching the variant, electing to use the identical “Ante Only” format made popular at Triton, including rules and blind structures.

Under the Ante Only arrangement, every player is required to post an ante pre-flop. It makes for bigger pots even before any cards are dealt. Add that to the typically more aggressive style of play brought about by a shortened deck and you have a recipe for action and larger pots than standard games of Texas Hold’em.

I’m a big fan of the format. Enough of boring waiting and folding. SHORTDECK is the most action-packed poker game out there!

Party Poker will allow SHORTDECK players to remove money from the table and continue playing, provided that their chip stack meets specific requirements of big blind levels before doing so. Generally, such practices are frowned upon in live poker rooms and most poker sites don’t offer that option.

SHORTDECK hasn’t yet been extended to MTTs or Sit & Gos at Party Poker, but it’s likely that such offerings will soon follow.

Players who join the SHORTDECK action at Party Poker should keep in mind that hand rankings are slightly modified in the 36-card game. A flush normally beats a full house in Six Plus Hold’em because five cards of the same suit are harder to make since there are only nine cards of each suit in play – instead of 13 as in Texas Hold’em.

On that note, it’s a good idea to check the hand rankings of Short Deck Poker no matter where you play, whether it’s Party Poker, Americas Cardroom, or any live poker rooms. There are no fully accepted standard hand ranking rules for Six Plus Hold’em as of yet, so be aware of that!