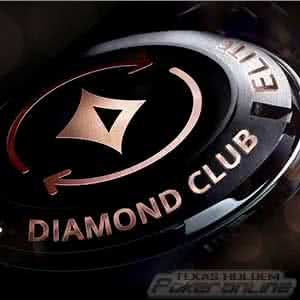 Party Poker has created a new top tier in its player loyalty program known as “Diamond Club Elite” that pays up to 60% cashback to players who reach the level.

The program for the new upper echelon reserved for top rakers kicks off on February 1 and requires players to rake $200,000 over 12 months. It matters not whether that rake total is achieved via tournaments, Sit & Gos, or cash games – or any combination of the three.

Players who qualify for Diamond Club Elite status can expect some amazing perks befitting of anyone who can attain such a lofty goal. In addition to 60% cashback, members of the new club will receive a VIP package valued at $16,000 for the Party Poker Caribbean Poker Party held every year in The Bahamas, as well as a seat to the $10,300 MILLIONS Online – an event that last year set the record for the biggest prize pool in online poker history at $21,385,000.

The goodies don’t end there for Diamond Club Elite members. The pot gets even sweeter with VIP service at all Party Poker LIVE events and full support from a poker room account manager at any hour – day or night.

We are extremely excited to take Party Poker to the next level and reward our most loyal players with the introduction of Diamond Club Elite.

In honor of the rollout of Diamond Club Elite, Party Poker will dole out 100% cashback to the first two players who hit the $200,000 milestone while playing ring games or Sit & Go Jackpots. The promo runs through January 31, 2020.

The new 60% cashback is a similar percentage to what PokerStars rewarded its SuperNova Elite players several years ago. Since 2015, that level is no longer available at PokerStars, a decision that caused considerable controversy and a serious rift between high volume players and the poker room.

It appears that Party Poker is now aiming to cater to the elite class of grinders that once roamed the lobby and virtual tables at PokerStars. Waters admitted as much when he said that the new Diamond Club Elite program makes us the clear number one choice for VIP players in the online poker industry.

Introduction of the new VIP level comes at a time when most poker sites are bending backwards for recreational players. Party Poker has certainly not forsaken the casual crowd but instead appears to be opening its doors to players of all bankroll sizes and skill levels.