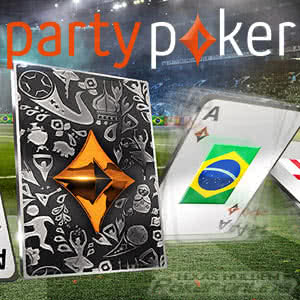 This summer’s World Cup promises to be exciting football action and Party Poker has added even more excitement with a new Click Card Championships promotion that will pay out $80,000 in guaranteed freerolls, a $5,300 MILLIONS Online entry, and more cash prizes.

The Click Card Championships is a leaderboard-based promo that begins on June 14 with the first match of World Cup competition. Players must opt-in to take part in the promo, with June 1 slated as the opening date to enter the action by doing so. All participants will receive a free Click Card and will become members of a team aligned with one of the 32 World Cup teams.

While the assignment to a football team will be random, there will be nothing random about earning valuable leaderboard points. Simply play poker, make wagers on the World Cup games, or gamble in the Party Casino in order to collect points and represent your team, climbing up the leaderboard in the process.

At the conclusion of the World Cup on July 15, all players can consider themselves winners as each player will be able to participate in a freeroll. The only difference will be the guaranteed prize money of the freeroll to which each player is assigned. Naturally, players on the teams that earned the most leaderboard points will play in the highest guaranteed prize pools such as the $30,000 GTD freeroll for the winning team.

The top-ranked teams in the leaderboard race will win additional prizes. All members of the 1st place team will receive $50 in cash credited to their Party Poker accounts. Also, players aligned with the team that takes home the World Cup will each receive a $10 Sit & Go Jackpot package. Should the same team win in both of those categories, all team members will win both prizes!

We wanted to offer our players a promotion that would build with the excitement of the World Cup,

The Click Card Championships leaderboard race is also a competition among individual players. The player who earns the most points during the course of the World Cup from June 14 through July 15 will win a grand prize consisting of a $5,300 entry to the $20 million guaranteed MILLIONS Online tournament set for December.

Now that you know the gist of the Click Card Championships, you may be wondering which games offer the most opportunities to earn points so that you can be a team player and collect as many points as possible. There are six different ways to accrue leaderboard points, giving players a chance to play a variety of games of their choosing.

Keep in mind that players who enter the Click Card Championships after the June 14 start will still be randomly assigned to a team, but opting in must be done first before leaderboard points will be awarded. So it’s best to opt-in once June arrives so that you can root for your World Cup team while earning leaderboard points for your corresponding team and aiming for the top prizes!