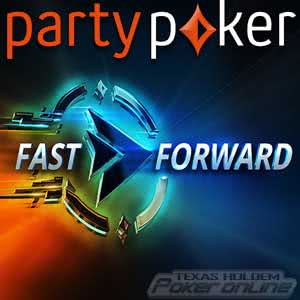 A new, exciting weekly leaderboard race is on at Party Poker where top finishers will pocket $30,000 every week on the fast fold tables of Fastforward Poker.

It’s not only No Limit Hold’em players who will be permitted to get in on the Fastforward leaderboard action as Party Poker has included a separate leaderboard race for Pot Limit Omaha players. The weekly leaderboards will see $20,000 land in the pockets of NLHE players and another $10,000 destined for the accounts of PLO customers.

Each leaderboard race will run from 00:00 CEST on Monday through 23:59 CEST on Sunday. The first week began on August 5 and will conclude on August 11. Players are advised to opt-in in order to participate.

Leaderboard points are tallied via Party Poker cashback points. By logging on and playing as many hands as possible, players will zoom up the leaderboard where payouts are reserved for the top 20 finishers in both PLO and NLHE.

Take a look at the Fastforward leaderboard weekly payouts for both games:

Fast fold poker has been around since 2010 appearing on the scene first as “Rush Poker” at Full Tilt. The concept has since been copied by practically every major poker site, with each calling it by a different name.

The rules with regard to hand rankings and play are the same as traditional NLHE and PLO. The main difference is that participating players all belong to the same player pool and have the option of quickly folding their hole cards without waiting for the hand to play out, whereupon they will be quickly jettisoned to a new table among other players within the same pool.

Hundreds of Hands per Hour

It allows the game to move rapidly and players can see roughly 4x more hands than the standard amount. Couple that with the option to play up to six Fastforward tables simultaneously and you have the recipe for lots of poker action without having to wait around.

While some poker purists have criticized the fast fold poker concept, there remains no doubt about the game’s popularity among a certain faction of online players. Party Poker’s version of Fastforward Poker is a hit with a number of its customers and now the new leaderboard races will likely attract some new blood into the mix.

$30,000 is guaranteed to be won every week in the new and exciting #fastforward leaderboards. Hit the fastforward tables, earn #cashback points and climb up the leaderboards where a top prize of $5K awaits! https://t.co/Z8b7pfkiyu 18+. Play responsibly. begambleaware pic.twitter.com/AP16kzjgbb

If you’ve yet to try fast fold poker, now may be a good time to do so. The $30,000 in leaderboard money is fronted by Party Poker, which makes it a poker bonus there for the taking.

Just be prepared to play hundreds of hands per hour and gear up for the heightened pace of action. The race for the top weekly leaderboard prizes of $5,000 in No Limit Hold’em and $2,500 in Pot Limit Omaha is certain to be a good one. The beauty is that any and all opted in players can take a shot at the generous prizes allotted to the top 20 finishers of each leaderboard race.