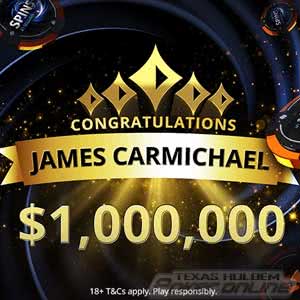 The huge 240,000x multiplier only appears once every 1 million hands, making it a true one in a million opportunity. The luck of the spin was certainly fortunate for James “James23C” Carmichael, a UK resident who earned the top prize of $1,000,000 after beating two opponents in the hyper-turbo three-handed SPINS game.

Those opponents were “elielalbiter” from Mexico and “nilverlobo” from Peru. They both missed out on becoming instant millionaires, but each still claimed a prize of $100,000. Not too shabby for a $5 investment.

Carmichael became Party Poker’s first ever SPINS millionaire since the online poker site rebranded the Sit & Go Jackpot game last February. It’s likely that another SPINS millionaire will emerge before the close of 2019 according to the formula or odds chart that determines the frequency of each multiplier in every $5 SPINS game at Party Poker.

Take a look at the chart below that shows that the vast majority (76%) of $5 SPINS games will result in a random prize pool of $10 to be claimed by a single winner. The multiplier is of a single $5 buy-in.

As is evident by the table, when the three largest multipliers (120x to 240,000x) come into play on the jackpot prize pool, all players share in the prize. But in the five lowest multipliers (2x to 25x), only the winner of the $5 SPINS game earns money.

The massive $1,200,000 prize pool appeared on June 11. It took 19 hands for Carmichael to dispose of his opponents. Eliminated first was nilverlobo, leaving James23C and elielalbiter to battle for the top prize of a million dollars.

The final hand saw Carmichael holding K-9 suited in diamonds and elielalbiter with pocket sixes. Another six on the flop gave elielalbiter a set and the lead, but two diamonds on the flop had James23C in contention with a flush draw.

Congratulations to the UK player "James23C" 🇬🇧 who has just won a $1m @partypoker SPINS for a $5 buy in! 👏Also to "nilverlobo" from Peru 🇵🇪 and "elielalbiter" from Mexico 🇲🇽who played and each won $100,000 https://t.co/ON0JG7htjj 18+. Play responsibly. https://t.co/Qk1mEDhgYr pic.twitter.com/kpBEiZVrrY

When the turn card revealed the eight of diamonds, Carmichael made his flush and won the hand, the game, and $1,000,000. He’s a regular SPINS player who also dabbles in low stakes multi-table tournaments.

Sit & Go Jackpot games have been a big hit at Party Poker and at a number of other poker sites. Many online poker rooms have their own version of the game complete with a wide range of possible jackpot multipliers and buy-ins.

Americas Cardroom, Ignition Poker and BetOnline Poker all spread a lottery-style Sit & Go Jackpot game. The buy-ins vary from low stakes to high, giving players of all bankroll sizes an opportunity to get in on the action.

Players within the US can’t log on at Party Poker but can play at the other poker sites mentioned. All are US-friendly and offer a generous Welcome Bonus to first-time depositors. Check out our poker site review pages for more information.