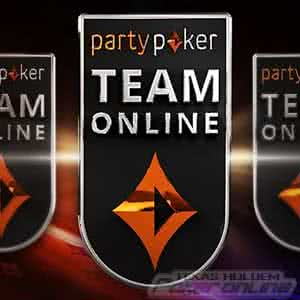 Party Poker has announced the creation of a new Team Online that will be comprised of the poker industry’s most popular Twitch streamers.

To that end, the first player to join Team Online is Matt Staples, a 22-year-old Canadian with a Twitch following of 52,000 subscribers. Matt is the younger brother of Jaime Staples, another Twitch mainstay who recently cut ties with PokerStars following a stint as a sponsored pro.

Jaime and Matt gained a new slew of followers after embarking on a weight loss and gain challenge under the parameters of a prop bet with hedge fund trader and high stakes amateur poker player Bill Perkins. The brothers, who could have been called “fatty” and “skinny” prior to the prop bet, were required to be within one lb. of each other weight-wise in a year’s time.

Very excited to announce that I have officially joined @partypoker Team Online. The future looks very bright and i'm more motivated than ever to deliver solid content on twitch and to work with this team to do some great things. https://t.co/IgoRmlW4fp pic.twitter.com/KQeTiNfHCb

The now beefed-up Matt began his poker career at low stakes and eventually moved up to the mid and high stakes range. He aspires to be a regular at the high stakes tournament tables and is seemingly on that path.

“There’s nothing I like more than streaming tournaments on Twitch and I’m pumped to have the opportunity to showcase and help grow Party Poker and their Twitch community.”

The signing of Matt comes just days after Party Poker announced a partnership with Perkins and his Twitch channel known as “The Thirst Lounge.” In addition to featuring poker, The Thirst Lounge is dedicated to improving the lifestyles of its viewers, encouraging them to live life to the fullest.

Party Poker’s newfound partnerships on Twitch are part of a new strategy that aims to capitalize on the popularity of the poker and gaming streaming platform. The poker room also has plans to announce the addition of more Team Online players in coming days.

Party Poker managing director Tom Waters admitted that the site had been “a bit behind the curve when it comes to streaming,” but indicated that that will no longer be the case as “an elite team that will be able to stream entertaining and engaging content 24/7” will soon be allied with Party Poker.

PokerStars had been associated with the game’s top streamers until recently when Jaime Staples and Jeff Gross became so-called free agents and announced that no new partnership deals would be forthcoming. Still under wraps representing PokerStars is Lex Veldhuis, poker’s top streamer, but a defection from him may be imminent as well.

In conjunction with a solid footprint on Twitch with popular streamers, players and fans can expect even more streaming from Party Poker in the form of a new high stakes cash game. Some of poker’s biggest personalities will be invited to showcase their skills in live action for the entire Twitch community.

Also, current Team Party Poker members such as Fedor Holz and Patrick Leonard will have an increased presence on the streaming platform. Those top players will be among the hosts of new Twitch streaming sessions that will spotlight any number of poker-related topics.