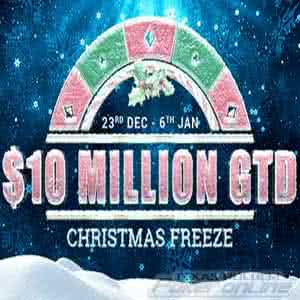 Party Poker released details of a new MTT series set for the Christmas holiday season that will pay out more than $10 million in guaranteed prize money.

The online poker festival is called the Christmas Freeze, not only because of the winter climate, but also because each of the scheduled 201 events will be played under a freezeout format. That means no re-entries, forcing players to shoot only one bullet in hopes of making a deep run and scoring a nice payday.

The Christmas Freeze is scheduled for December 23 through January 6. However, the series will go on hiatus both Christmas Eve (Dec. 24) and New Years Eve (Dec. 31), allowing players time to spend the holidays with family and loved ones.

While freezeouts will make up the entire schedule of the Christmas Freeze series, there will be plenty of variety as the formats will include 6-Max, 8-Max, Mix-Max, and Progressive Knockout tournaments. Along with Texas Hold’em, there will also be Pot Limit Omaha action for players who prefer looking at four hole cards instead of two.

The dates of the Christmas Freeze coincide almost exactly with those of PokerStars Winter Series that was announced just a few days ago. The Winter Series will run one more day (Dec. 23 thru Jan. 7) and won’t suspend action on the eves of both Christmas and New Years as Party Poker has decided to do.

The Winter Series will payout $40 million over 240 events, with buy-ins from micro through high rollers. The entry fees for the Christmas Freeze also run wide, from $3.30 up to $1,050. The competition or gamesmanship between PokerStars and Party Poker in running big series’ at the same time is great for online poker, giving players plenty of options during the holidays and beyond.

Party Poker is already running a holiday-themed promotion called Christmas Advent. It started on Dec. 1 and will run through Christmas. The promo allows players the chance to win a prize every single day.

To participate, just open up the window of the Christmas Advent calendar that pops up on the Party Poker home page and opt in daily. Simply earn one Cashback point playing poker and receive a prize of either MTT tickets, a Sportsbet Bonus, or Cashback points.

A special prize awaits players on Christmas Day in this promotion. Party Poker will take on the role of Santa in awarding players an incredible tournament package.

While it’s a good idea to live in the moment, those who like to look ahead to the future may be interested to know that Party Poker has also revealed plans regarding the hosting of online poker series for the beginning of 2019. Following the conclusion of the Christmas Freeze on Jan. 6, a new KO Series will begin two weeks later on Jan. 20 and run through Feb. 3.

Next up will be the Monster Series from Feb. 24 through March 3. Following that comes another edition of PowerFest from March 24 through April 7. But first things first, so win your daily prize in the Christmas Advent giveaway and get ready for the Christmas Freeze starting Dec. 23.