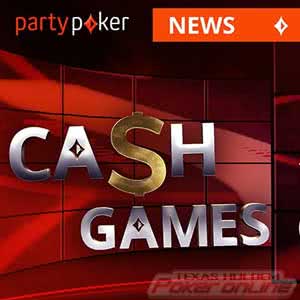 A lot of changes are coming to Party Poker in order to level the playing field and the newest is a minimum buy-in of 100 big blinds at all cash game tables.

Party Poker made that announcement via social media, explaining that the change will be put into effect by the end of this month. Players have less than two weeks to continue playing short-stacked and/or ratholing, the very behaviors that the poker room is hoping to abolish.

Cash game news: All of our #cashgames, including #fastforward, will have a minimum buy-in of 100 big blinds by the end of June as part of our ongoing improvements. More details coming soon. https://t.co/jO5hpF2NY4 18+. Play responsibly. begambleaware pic.twitter.com/p7ausZOhdE

Those who favor short-stacked play point to the possible advantages tied to doing so. There is less financial risk to your bankroll and your decisions aren’t as complex – as the main objective is to double up.

Shoving all-in at an opportune time might result in attracting calls from bigger stacks. Those same bigger stacks may attempt to play more aggressively, resulting in short stacks receiving more play on their optimal hands and getting paid off.

However, those same players who buy-in with short stacks often do so at a higher stake level than is affordable according to their bankroll. And if they bust, they’re gone. The big blind minimum is intended to protect them, keeping their money in play longer instead of taking a shot at racking up chips with a short stack.

Requiring everyone to start with at least the same stack size – including at the fast fold cash game known as FastForward – makes the game fairer for all involved. It’s likely better for recreational players who may not be very adept at short stack play.

Also frowned upon by many players is the practice of ratholing, typically defined as winning chips in a cash game and leaving the game, only to rebuy later with a shorter stack. Party Poker’s new big blind minimum will eliminate that maneuver.

While the BB minimum for cash games is on Party Poker’s to do list, the poker room has recently implemented other changes designed to bring more fairness to the game. A forced screen name change went into effect on June 17, requiring players to select a new online moniker.

The change of player names was part of an Alias Race promotion that doled out $500,000 in cash and prizes during a 24-hour period. The idea is for every player to start fresh and all previous hand histories saved for the purpose of studying player habits and tendencies have been rendered moot.

How much money will you pad your bankroll with in the #AliasRace? Another $10,000 will be won between 0100-0200 BST. Get your click card by opting in and earning at least 0.10 loyalty points in the next 60-mins. https://t.co/C6aNDH7IF1 18+. Play responsibly. begambleaware pic.twitter.com/7DMOctunm1

Third-party tracking tools are banned at Party Poker as well. No longer will software such as heads-up displays (HUDs) be workable at the poker site, which is a benefit to casual players who don’t use such technology in hopes of gaining an edge over the competition.

There are plenty more changes planned at Party Poker in coming months, all intended to make for a safe and fair poker-playing environment. Look for high stakes and heads-up tables to require players to use their real names instead of screen names.

Party Poker is bending over backwards for recreational players. It’s likely a good time for newbies to check out the action there, grabbing a generous Welcome Bonus upon making that first deposit.