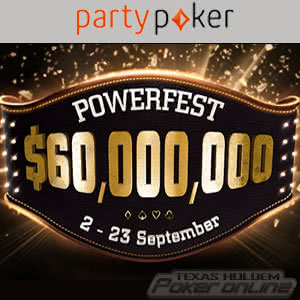 The schedule has been released for Party Poker’s ninth installment of its popular POWERFEST series, which will be the poker room’s biggest ever online tournament festival. More than $60 million in guaranteed prize money will be doled out over 670 events running from September 2-23, 2018.

The previous eight POWERFEST series’ have been wildly successful, prompting Party Poker to increase guarantees by 50% for the upcoming tournament extravaganza. A full 22 days of action will see players of all budget sizes and stake levels covered, with tiers categorized as Micro, Low, Medium, High, High Roller and Super High Roller each running plentiful events.

Entry fees range from as low as $1.10 on up to $25,500 for the series, with at least 15 events set to pay out $1 million in guaranteed prize money. That caused Party Poker Managing Director Tom Waters to state that excitement is high in the site’s corporate offices, as POWERFEST will give more players than ever before the chance to win life-changing money.

Championship Trophies to be Awarded

There are a total of 20 Championship Events on the POWERFEST docket, with winners of each of the 20 tournaments to be awarded trophies for topping the field in their respective contests. While most of the Championship Events fall under the High Roller and Super High Roller levels, there is one tournament that low stakes players should take note of.

Event #144 on Sept. 23 costs only $3.30 to enter and guarantees at least $15,000 in prize money. Hosted as a Progressive Knock Out event, the tournament gives players on a budget a chance to win a championship title.

The final day of POWERFEST on Sept. 23 will see seven Championship Events played, as the series will close out with a bang. More than $6 million in prize money will be paid out throughout the day, including three tournaments each guaranteeing $1 million.

While $60 million in guaranteed prize money is a staggering amount, players will have chances to pad their bankrolls in other ways as well. Additional goodies will be dished out to POWERFEST loyalists in the form of valuable promotions such as a leaderboard race and daily Happy Hours.

Each POWERFEST has bettered the previous one, and if this surpasses May’s series then it’s going to be very special,

Party Poker Team Pros are gearing up to stream POWERFEST action via the Twitch channel. Viewers can expect to be on the receiving end of some free prizes through that platform.