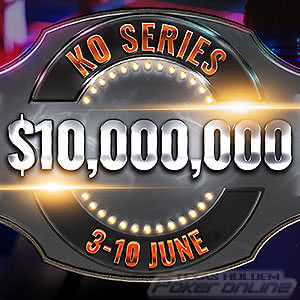 Party Poker has announced the schedule for its upcoming Progressive Knockout (PKO) Series that will feature 226 events and run from June 3-10. Players will shoot for $10 million in guaranteed prize money over the course of the eight-day festival, as well as any money won in player bounties.

The PKO is one of the hottest online poker tournament structures of late and it features a bounty placed on the head of each player. Sending a player to the rail results in you collecting half of that player’s bounty, with the other half added to your own bounty to be scooped up by whichever player happens to knock you out of the tournament.

The only bounty to remain uncollected belongs to the eventual winner of the tournament. The champion gets to claim their own bounty, as well as first place prize money.

Progressive Knockouts are typically loads of fun, with players tending to loosen up their game in order to eliminate opponents to collect an instant payout. And by the later stages of the event, the remaining players have some large bounties on their heads, making a KO that much more valuable.

No Rake on Bounty Portion of Buy-In

An added bonus at Party Poker is that all PKO tournaments are hosted without any rake on the bounty portion of the entry fee. That’s a considerable savings for avid MTT players who have enjoyed less rake on PKO events over the last month or so and can expect to benefit from such savings in the $10 million series and beyond during a six-month trial period.

After reviewing feedback from the poker community …. we removed rake on the bounty element on all our PKO MTTs …. for six months with the intention to make this a permanent reduction to our pricing structure,

The $10 million PKO Series from June 3 through June 10 marks the second time this year that Party Poker will host such a festival after a successful initial run back in February. It’s the first time being run as rake-free on the bounty portion of entry fees.

Buy-Ins for All Budgets

The Progressive Knockout schedule features tournaments at every imagineable buy-in level, starting at Micro and continuing to Low, Medium, and on up to High and High Roller. The entry fees range from $0.55 to $1,050, promising affordable action for one and all.

There are four Championship events within the PKO Series that offer a combined prize pool of $2 million guaranteed. All four are in the High Roller category, with buy-ins fixed at either $530 or $1,050.

Two Championship tournaments will be held on the first day of the series, Sunday June 3. Two more are scheduled for the last day, Sunday June 10. Each come equipped with a $500,000 guarantee.

Whatever your budget or stake level, the chance to aim for big prize money, as well as grab more cash with every player that you KO, makes Party Poker’s PKO Series a can’t miss affair.