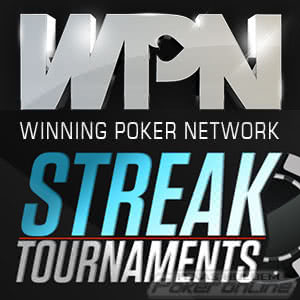 The Winning Poker Network´s new Streak tournaments are yet to capture the imagination of its player database, and – although not all the events start due to a lack of numbers – the tournaments played so far this week have had massive overlays.

The Winning Poker Network´s new Streak tournaments were officially launched on Monday after a couple of weeks of test runs. They are unique inasmuch as only the top eight players in each event win a cash amount, while the next 30% to 35% of players are “in the money” but only receive a ticket to the next day´s Streak tournament.

Players who receive a ticket for the next day´s Streak tournament, are automatically registered in the event. It is possible to unregister from the Streak tournament if you are unable to play it, and the Network is considering the possibility of allowing players to exchange unused Streak tournament entries for Tournament Dollars (T$) that can be used to enter any online poker tournament.

Each Streak tournament is an 8-Max freezeout NL Hold´em event with two hours of late registration. There are no re-entries allowed during the late registration period and, as players start with 10,000 chips and levels last twelve minutes each, the early stages of the tournament tend to be played cautiously. At the close of late registration, blinds are only 200/400 (ante 40), so the starting stack is still worth twenty-five big blinds.

At present, there are eight Streak tournaments scheduled for each day. As happened during the test runs, not all the scheduled tournaments start due to a lack of entries. However, those that have been played so far this week have resulted in massive overlays – meaning that players winning a cash amount are winning multiple times what they would in a regular freezeout tournament.

One of the reasons why some Streak tournaments have failed to get underway is their timings. As the Winning Poker Network accepts players from all over the world, half of the events are scheduled to appeal to players in Asia and Australia where the player database is not as large as it is in America and Europe (We don´t know many US players that will play a $265.00 buy-in event at 10:15 in the morning!).

Last night´s “first night” of the Streak tournaments may not be representative of things to come, but it is well worth commenting on. Just two events reached their minimum entry requirement, and both overlaid by approximately 66% – meaning that players who reached the final tables received around three times as much as they would have done in a regular freezeout tournament. These are the details:

Whereas the first four tournaments each day need a minimum of fifty players registered by their scheduled start times in order to get underway, the later tournaments need a minimum of sixty entries due to their larger guarantees. If you visit a site on the Winning Poker Network and see a Streak tournament already underway, it could be well worth leaping into the event and seeing if you can reach one of the final table places.

If you are not yet playing at a site on the Winning Poker Network, now could be the time to check one out. In addition to the Streak tournaments, sites such as Americas Cardroom (review) and Black Chip Poker (review) are hosting “Million Dollar Sunday” events with $1,000,001 guaranteed prize pools. Both sites offer a generous first deposit bonus of up to $1,000 – more details of which you can read in their respective reviews.