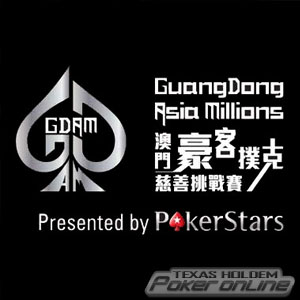 This week, the biggest tournament in the world wasn’t played at the WSOP. Instead, it took place halfway around the world in Macau, China. The $130k entry fee for the PokerStars GaungDong Limited Asia Millions dwarfed those found under the bright lights of Las Vegas, as 71 hopefuls vied for their share of a massive $15.4 million prize pool. When the last cards were dealt, it was Niklas Heinecker standing proud as the winner of almost $4.5 million.

As if the staggering entry fee weren’t enough, the Asia Millions was also a re-buy tournament. Shockingly, 54 out of the 71 entrants exercised their option, most of whom would bust a second time. Only eight participants were paid, with 8th place finisher Praytush Buddiga receiving nearly $773k for his efforts. Overall, the payouts more closely resembled what one would normally see at the WSOP Main Event than at an exclusive tournament in China.

The final table was fast-paced and action packed, largely because the average stack was only about 15 big blinds. The first two players were eliminated in rapid succession. There was a much welcome lull in the action, but it wouldn’t be too long before Igor Kurganov would suffer a bad beat at the hands of Zheng Tang, to finish in 6th.

Notable online pro Issac Haxton had perhaps the most nerve wrecking day of any player at the table. After being whittled down to one big blind he doubled up several times, only to get busted by A-Q when attempting a steal. The Team PokerStars member finished in fifth, good for $1.3 million.

But seasoned pro Heinecker was the real story. Although he benefited from winning two critical coin flips, he was never the one in danger of being busted. Heinecker would enter heads-up play with a sizable 3-to-1 chip lead. Due to the tournament’s relatively shallow blind structure the two remaining participants found themselves didn’t waste any time getting all the chips into the middle. Runner-up Jeff Rossiter held Q-T against Heinecker’s A-9 of hearts – essentially a flip. The board bricked out for both players, leaving Heinecker the winner.

Heinecker all but admitted that the high entry fee of the tournament placed him out of his comfort zone, but that he was able to recover just enough to take it down. His biggest tournament cash to date before the Asia Millions was slightly over $100k – a paltry amount in comparison.