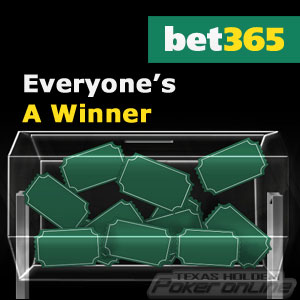 Bet365 Poker has launched an exciting new “Everyone´s a Winner” online poker promotion in which it would be practically impossible not to win a prize.

Bet365 Poker literally wants everybody to be a winner in its new promotion that starts this week – a draw-based promotion with 2,020 prizes of tournament entry tickets on offer each day, plus the opportunity to win extra cash in two daily freeroll events for which the qualifying criteria is easy to achieve.

Overall, Bet365 Poker will be giving away €4,000 every day up until Sunday 11th October – that´s more than €100,000 in tournament entries and cash prizes. Furthermore, the total number of prizes up for grabs exceeds seventy thousand. So, it is going to be practically impossible not to win a prize in Bet365 Poker´s “Everyone´s a Winner” promotion.

Merit Points are awarded at the rate of 15 per €uro paid in rake or tournament entry fees, so collecting two Gold Coins is not a big ask. Every player that achieves the qualifying criteria for the daily draw also gets a tournament entry ticket which can be used in either a €1,000 all-in shootout or a freeroll tournament that also has a €1,000 prize pool.

Players can qualify for up to fifty draw tickets each day, but have to opt-in to the promotion in the poker client before being eligible for any of the prizes. Players without an account should have a look at our Bet365 review to see how you can get €5.00 in free poker tournament tokens (no deposit required – country restrictions apply) and a Bet365 poker bonus of up to €100.00.

What are the Prizes?

The prizes in the freeroll and shoot-out tournaments (which are played at 7:30pm GMT each day) are self-explanatory, but the prizes in the “Everyone´s a Winner” daily draw need a little bit of explanation.

Bet365 Poker has an ongoing promotion known as “Premium Steps”. Each step consists of a three-handed Sit & Go game in which the winner progresses to the next step, while the runner-up gets another shot at the previous step. Players who reach Step 8 or Step 9 have the option of cashing out for €151 or €350 respectively, or playing the final Step to win a €800 prize.

Players will be credited with their tournament tickets within three hours of the draw taking place (around noon GMT each day) and have two months in which to use the ticket to enter the “Premium Steps” promotion. Unfortunately the “Premium Steps” tournament tokens have no cash exchange value until players reach Level 8, but the “Everyone´s a Winner” promotion is sure to see plenty of players aiming for the top prize.