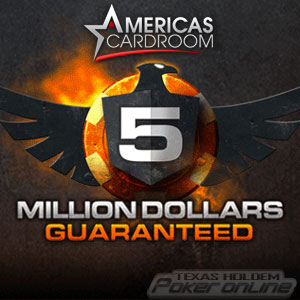 Three mega satellites are scheduled for the end of this week, allowing players to qualify for Sunday´s million dollar tournament at a fraction of the buy-in.

This coming Sunday – 4th October – Americas Cardroom will host the first of four Million Dollar Sundays. Each of the four tournaments has a guaranteed prize pool of $1 million dollars, but they also have a bankroll busting buy-in of $540.00.

Consequently, Americas Cardroom is offering players the opportunity to qualify for the most valuable poker tournament open to US poker players through a series of mega satellites that guarantee a minimum of 250 seats into Sunday´s event.

Each of the mega satellites also has a selection of feeder sub-satellites – the most popular of which will undoubtedly be the “Deadline” events – plus a host of alternative ways in which players can qualify for the Million Dollar Sunday tournament at a fraction of the buy-in.

Two “Deadline” sub-satellites with a buy-in of $8.80 are scheduled to take place before each of the mega satellites, guaranteeing either twenty-five or fifty seats into the mega satellite tournaments; and there is a special fifteen seat “Super-Satellite” scheduled for Saturday afternoon (4:45pm – buy-in $11.00) which will appeal to players who prefer a freezeout structure rather than unlimited re-entries.

For players who prefer smaller fields, Americas Cardroom is hosting special “On Demand” Sit & Go qualifiers that guarantee seats directly into the million dollar tournament. “On Demand” Sit & GO games get underway when a pre-determined number of players have registered, and then continue as a multi table tournament with re-buts and late registration available for the first hour.

The site is also offering a Sit & Go route into the Million Dollar Sunday through its “Million or Bust” promotion. “Million or Bust” is a version of the Americas Cardroom´s popular “Jackpot Poker”, which is a three-player hyper-turbo game. In the “Million or Bust” promotion, players can randomly win seats in the million dollar tournament (instead of cash prizes) by entering games with a buy-in of $1.00 or $12.00. Naturally, you have a better chance of winning a seat in the $12.00 games, but who knows?

Sadly (!), the “Five Million Reload Bonus” is not a reload bonus of five million dollars, but a bonus offered to players while the five “Million Dollar Sundays” is in progress (Sunday´s event is the second in the series). The value of the bonus is calculated according to the value of the reload deposit, as is the time that players have to clear it:

To be eligible for the reload bonus, use the Americas Cardroom bonus code “FIVEMILLION” when making a reload deposit (*). The offer expires on Wednesday October 28.

(*) The “Five Million Reload Bonus” is not available to new players. New players should use the Americas Cardroom bonus code “THPOBONUS” when making their first deposit to be eligible for a 100% match bonus up to $1,000. Details on how to clear the bonus can be found in our Americas Cardroom bonus code page, and for more details about the full range of promotions available at the site, head over to our review.

See you at the final table on Million Dollar Sunday!