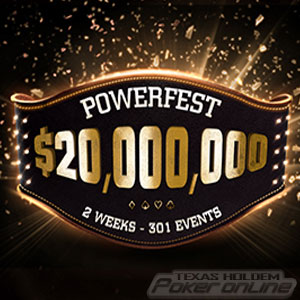 Party Poker has announced its next PowerFest series will be between May 7 and May 21, will consist of more than 300 events and be guaranteed for $20 million.

Party Poker (review) has released preliminary details of its next PowerFest tournament series and revealed that eight tournaments will have prize pool guarantees of $1 million or more – including three special editions of its feature “Title Fight” event and a Super High Rollers event with a buy-in of $25,500.

The massive $20 million guarantee for the series is a ten-fold increase from when Party Poker first launched PokerFest in 2014 (subsequently renamed PowerFest last year) and indicates the growing popularity of the series among online poker players.

It is also an indication of the confidence Party Poker has in its series that it is scheduling PowerFest to go head-to-head against PokerStars´ SCOOP. The site obviously expects players to compete in both series simultaneously and, looking at the schedule released to date, it is likely that many players will.

Unlike in some PowerFest series, the weight categories will not have their own schedules of events or own weeks in which the tournaments are played. Instead, Party Poker is cramming 301 events into fifteen days of action, with each weight category having its Main Event on May 21.

Much of the PowerFest schedule will likely be fashioned around the existing tournament schedule, with a few significant bumps to the guarantees. For example, the $150,000 guaranteed “Title Fight” will have its usual guarantee elevated to $1 million on Sundays 7, 14 and 21 May.

Five Other Million Dollar Guarantees on the Schedule

In addition to the three $1 million Title Fight events (one of which is the Heavyweight category Main Event), there will be a further $1 million guaranteed Main Event for High Rollers (buy-in $1,050), a second High Rollers event on May 21 (buy-in $5,200) and two $1 million “phased” tournaments.

The final event with a big guarantee is the $25,500 buy-in Super High Rollers on May 16. This event has a guaranteed prize pool of $2 million, and Party Poker has said it will donate the tournament entry fees to a charity of the winner´s choice – adding an extra $50,000 if the event attracts more than 100 entries.

The Super High Rollers event is expected to attract some of the biggest names in online poker – including Sam Trickett. Trickett told the Party Poker blog he expects to play in more PowerFest events than ever, and he commended the site for its charitable donation from the tournament entry fees.

Plenty of Qualifiers for Players with Modest Bankrolls

Although a direct buy-in to many of the $1 million guaranteed events is out of the reach of players with modest bankrolls, Party Poker is hosting a comprehensive satellite schedule starting at “Centroll” level. There will also be special satellite events that players can enter using their Party Points.

With the PowerFest series still six weeks away, many of these modest buy-in events with tournament entry tickets as prizes are undersubscribed and, if you want to win a share of a $1 million guaranteed prize pool, these could represent your best opportunity. To find out more about the opportunities waiting for you at Party Poker, visit the site today.