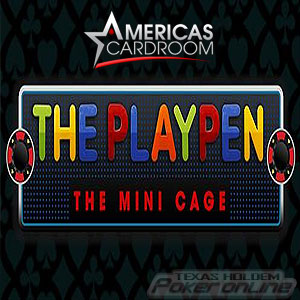 The “Cage” timed cash game event with a limited rake has been introduced at a lower stakes of just $10+0.50 in what Americas Cardroom calls the Playpen.

You no longer have to break the bank to get in on the action with timed cash games at Americas Cardroom. The Playpen offers the same action for $10+0.50.

One of the biggest problems that US players face compared to online poker fans from the rest of the world is somewhat of a lack of competition. There simply aren’t that many sites for US players to choose from, compared to several dozen for international players, and this relative lack of competition creates a situation where the rake can be a bit higher for American players. However, the Playpen concept at Winning Poker Network site Americas Cardroom offers an opportunity to pay a fixed rake for up to an hour of cash game play.

How the Playpen Works

The idea here is two-fold. First, it gives players a chance to play at higher stakes than they normally would because of the escalating blinds in what amounts to a cash game situation. Second, it gives you an opportunity to play a cash game with a very limited amount of rake, and it does this by hijacking the traditional tournament structure for a limited period of time.

There are a number of details that players will need to know if they want to get in on the action with the Playpen. For example, here are the blind levels:

After these four blind levels are complete, players are paid according to the number of chips they have in their stack. Players who bust out at any point exit the event. If you end up with 2,500 in chips, for example, then you’re paid out $25.00.

When, Where and How

These games are played at six-handed tables, and the buy-in is just $10.50. If you’re the type of player who likes atypical formats or who just wants to get a break on the rake for a cash game experience, then this is a good opportunity to do so.

Effects on the Industry

Nothing happens in a vacuum in the online poker industry, and this event is no exception. It’s a pretty big deal that players are able to get in on a timed style of cash game, especially since that’s been a standard format available in land-based poker rooms for a very long time. However, they’ve thrown in blinds that shift across a range from the equivalent of $0.05/0.10 to $0.25/0.50, and that’s interesting in that it’ll attract a wider range of players.

By itself, it’s an interesting format that’s worth consideration for both cash game and tournament players. However, it also shows that there are new forms of poker out there that are viable, and it’s up to the poker rooms and software companies to figure them out. If they fail to, then the online poker industry will continue to suffer.