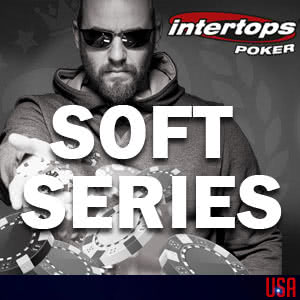 A new online poker tournament festival called the Soft Poker Series II with $28,250 in guaranteed prize money will be held at Intertops Poker from June 10-16.

Designed for Intertops Poker’s sportsbook bettors and recreational poker players, the Soft Poker Series II consists of 21 events at a wide variety of very affordable buy-ins. Included among the tournaments are two $500 GTD freerolls that anyone can enter.

The top prize within the $28,250 of guaranteed prize money up for grabs is a $6,500 package to the EPC Velden in Austria next month. That prize package includes the €2,700 Main Event entry fee, $500 for expenses, and five nights for two at a luxurious hotel.

The $6,500 EPC Velden package winner will be crowned in Event #21 – the final tournament of the series – that kicks off on Sunday, June 16 at 6:30 p.m. ET. It’s being called the Champions Tournament and is definitely a must-play event.

Take a look at the entire Soft Poker Series II schedule. All times listed are PM and ET:

While players will be vying for prize money and the ultimate prize of the $6,500 EPC Velden package from July 24-27 in Austria, an added bonus is that every winner of a Soft Poker Series II tournament will receive an Intertops Poker Soft Series Champion hoodie to go along with a ticket to the Champions Tournament (Event #21).

Incidentally, players who are anxious to aim for that $6,500 EPC Velden prize package and don’t want to wait for the Soft Poker Series II to begin on June 10 can head over to Intertops Poker right now and enter Step Satellites. The inexpensive satellites are available at Intertops until June 9 when a Final tournament ($110 buy-in) will be played that guarantees to send at least one winner to EPC Velden for the Main Event with a $6,500 prize package.

For any of our readers who have yet to play at Intertops Poker but would like to give it a try, we are happy to report that freerolls and low buy-in tournaments that offer big prize packages to cool and scenic poker-playing destinations aren’t the only perks and benefits available. Plenty of cash game action is also to be had, along with a 200% up to $1,000 deposit bonus for first-time depositors who use the Intertops Poker Intertops bonus code “THPOBONUS”.

Take a look at our review[/geolink] for more information on ways to build up a bankroll at the US-friendly poker room. Intertops has been around for more than two decades, a fact that hasn’t been lost on its loyal player base who enjoy stability and security in their favorite poker site.